STOP THE 'OFF-ROADERS' IN THE PEAK DISTRICT

Derbyshire County Council (DCC) has consulted this society about the possible upgrading of a number of public bridleways in the Win Hill area of the National Park to Byways Open to All Traffic (BOAT) status. 'Off-road' users claim that these routes carry historic vehicular rights from the 'horse and cart' era and that modern users have been using the bridleways for over 20 years. The bridleways are:

Basically these are bridleways:

From Derwent Lane by the war memorial car park at the side of Ladybower Reservoir up to Hagg Farm.

From Derwent Lane via Crookhill Farm & over Bridge End Pasture to Hagg Farm.

From the A57 past Hagg Farm towards the junction with the bridleway from Crookhill Farm.

If you have suffered inconvenience from vehicles using these routes, or if you have evidence of any accidents or other incidents caused by the use of these routes by vehicles, then we want to hear from you. If we can convince Derbyshire County Council that the use of these routes poses a hazard to other users, be they walkers, cyclists or horseriders, then such evidence could help to defeat the claims. This is the case even though user evidence from the vehicle users may prove the existence of vehicular rights. Even if the claims are successful and these bridleways become BOATs, we can use the evidence of damage and nuisance to persuade the National Park or DCC to impose Traffic Regulation Orders to prohibit use by motorised vehicles.

You can download a copy of a DEFRA report on the illegal use of mechanically-propelled vehicles (MPVs) on public rights of way and green spaces here. (2 Mb, 160 pages)

Greater Manchester Police Authority have set up a website to offer advice and a way of reporting off-road nuisance directly to them. Problems are particularly being experienced on the Rochdale moors. You can help our Peak & Northern Inspectors' efforts on this by registering complaints about off-roading here.

A TALE OF TWO SHOWS

Within my new duties as President lies organizing our presence at Shows to raise awareness of the Society and boost membership, following last year's very productive visits to the Cheshire and New Mills events. This year we selected the Royal Lancashire Agricultural Show and the Bakewell Show and what a contrast was to emerge!

The omens for the Royal Lancashire Show on July 18th were not good - we were on pitch 13, it was raining heavily and the wind howled. Up went the Gazebo secured by jumbo-sized pegs. Late that night our Agent rang to say the show would not open to the public the next day - weather dangerous, site muddy. All exhibitors could lose all or some of their costs - this is 2 years running that the Royal Lancashire Show has been abandoned and it remains to be seen if it will survive. So far for us £400 is at risk, considerable efforts in vain and new members - zero!!

And so to Bakewell on August 6th. Arrived early to find our site occupied in its entirety by a caravan and truck containing four mature Romany ladies, there to tell fortunes. They refused to move, so off we went to find the Show organiser. He was very reluctant to face them, but we forced his hand and the good ladies departed. For the two days the weather was brilliant, the crowds massive, the show superb and we recruited 84 new members. To each an every one of them, a warm welcome to the Society. 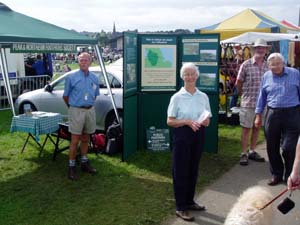 Thanks also to all our stand reps who worked their socks off talking about the Society and converting passers-by into new members. We are now looking at other events this year to make up for the Royal Lancashire debacle. Watch this space!!