The Cheshire County Show, like the Society, can trace its roots back to the early 1800s and it's fair to say that a footpath society would not always have been popular at the show. Times have changed and 19 & 20 June saw the Society's new stand sandwiched between Hound Magazine and the Wild Dogs of Wilmslow Flyball Display team and in close proximity to the Countryside Alliance and the Bridleways Association.

A team of volunteers manned the stand throughout the show and were kept busy explaining the aims and roles of the Society. Literally 100s of leaflets were handed out and perhaps more importantly 130 new members signed up. There were even times during the show when people were queuing up to fill out membership forms. I'd like to welcome all the new members to the Society and thank the team of volunteers: Hilda & Peter Bowler, David Bratt, Dirk Broad, Vince Joyce, Gillian & Alan Postill, Ian Ray and Clarke Rogerson. Special thanks go to Neil Collie for organising the event and manning the stand over both days. Clarke Rogerson
Vice Chairman 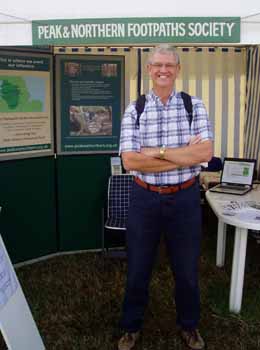 New member Ken Hobbs in front of our stand 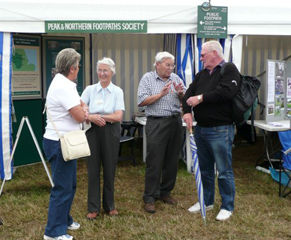 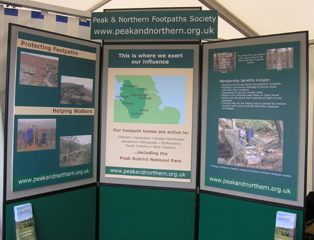 David and I manned a stand at the New Mills "One World Festival" on Saturday 23rd June. The theme for the festival was Environmental Access; Sir Martin Doughty, Vice President of the Society and Chair of Natural England gave a speech and visited our stand for a photo call, pictured here with new member Andy Simpkins and David Bratt.

A warm welcome to the 34 new members who signed up on the day; and to anyone reading this who took a leaflet from us, can I say it's not too late to sign-up at the special rate. Clarke Rogerson
Vice Chairman 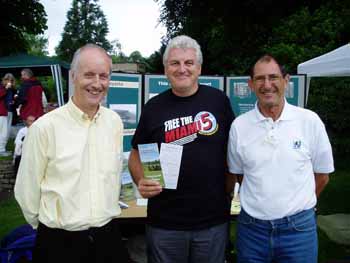 Follow this link to read the press release from the Ramblers:

Follow this link to read the full text of the Lords Ruling:

PNFS is proud to announce the handing over to Kirklees MC of three substantial bridges it has funded on a most attractive section of the Kirklees Way in Morton Woods near Scholes. 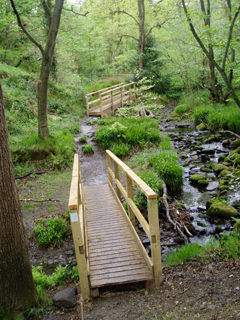 Sign SP322 was installed on Wednesday 11th July & will be formally dedicated in September by the Altrincham & District Rambling Club, who will be affixing a memorial plaque. This sign interestingly is the most westerly ever installed by PNFS in the 100 years of such activity. 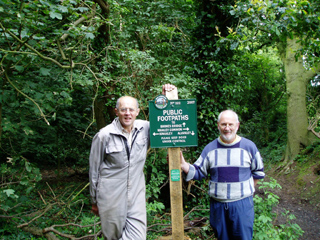 This bridge funded by PNFS member Dr. David Miller (pictured below second left) was handed over to Stockport MBC on Monday 9th July in the company of PNFS volunteers, landowner & friend, & BTCV who installed the bridge. The wholly inadequate original crossing can be seen as two sleepers to the right. 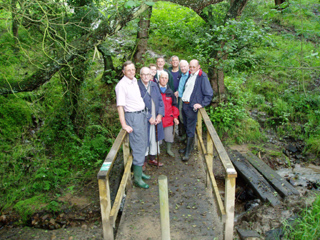