On Thursday 22 May I had the privilege of opening the new footbridge in Hey Wood, Kirklees, for the benefit of all walkers who pass that way. 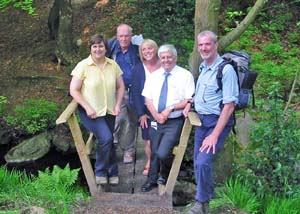 The bridge replaces a rather difficult stream crossing which would be nigh on impossible when the stream is in spate. But it has to be said that the bridge is only part of the story none of which would have been possible without the efforts and goodwill of a number of people. PNFS funding of bridges is always contingent on the return to use of paths that are either obstructed or otherwise overgrown and impassable.

On behalf of all walkers I would like to thank the following people:

Roy Makin the Rights of way Officer for Kirklees who co-ordinated the installation and associated path clearance. Mrs Alison Smith the landowner who gave permission for the bridge on land she owns and who is keen for walkers to enjoy all the paths through the woods. Special mention should be made of the volunteers who carried out the path clearance. These volunteers came from Pathways Day Services, a recovery based service for people with mental health problems, who worked in all weathers to clear the overgrown path leading down to the bridge. PROW Rangers, John Crabtree & Stephen Needham who built the bridge. And finally Neil Collie & Terry Norris from PNFS who were responsible for the negotiation and co-ordination of the project 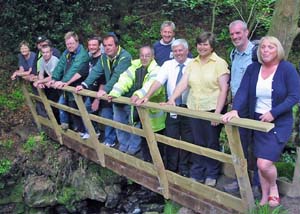 The 2008 AGM was held at the Britannia Hotel, Stockport on Saturday 26th April attended by 107 members. David Bratt handed over the reins after four years as Chairman to take over the role of President. You can download & listen to his address to the meeting here (8 Mb wav file). Clarke Rogerson was elected as the new Chairman. See our Contacts page for all the officer details.

The meeting voted to increase the subscription rates for 2008, which will now be as follows: