Half-Year Meeting of the Society

This will be held on Saturday 24th November at the Britannia Hotel, Dialstone Lane, Offerton, Stockport, starting at 10.30 am. Coffee will be served from 10.00 am. A complimentary buffet lunch will be served (donations welcomed).

There will be Reports on:

Progress since the AGM

and Open Debate on:

Use of Plastic Posts for Signposts

Get your anorak on and bag some signs!

Read the Sheffield Star's article on our 2007 Signpost Challenge here

Keeping our Signposts in condition!

A unique feature of our society is the series of signposts erected across the Peak and Pennines. We now have approaching 300 signs  - it would be something of a full time job to visit them all in any one year but we try our best in the never ending battle.

So far In 2007 over 100 signposts have received general maintenance. Four tubular posts replaced, three new signposts planted, one way marker and nine posts replanted. In addition, with a further eight new signposts in the pipeline we are kept very busy

Highlights of 2007 were: 4th January - replacing SP170 at Lydgate, our most easterly location, and 11th July – planting new SP322 in Delamere Forest, our most westerly. Our area of coverage is widening all the time. 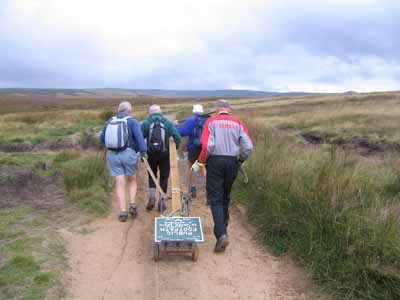 On 29th August, a PNFS team replanted SP98 on Rushup Edge, on a lovely day and a fantastic effort by all who turned up. The location is over a mile from the road and the old cast iron sign dated 1939 and supports were very heavy. We borrowed a trolley to assist in moving the sign and plans are in hand to purchase one for the Society. 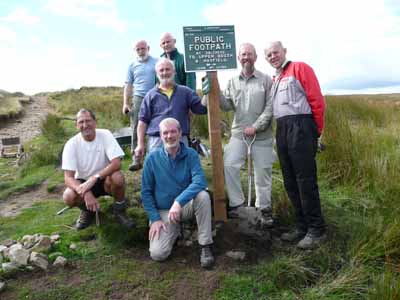 Is this a record?

In June this year Martin Riley, our Inspector for Oldham, lead a walk around the Newhey area on which we passed two blocked stiles. Although only 100 yards apart the two affected footpaths fell into two Highway Authority areas. The first Crompton 73 had a new fence with a very narrow gap stile which even the very slim Martin could not get through. The second Milnrow 345a had a gap stile blocked by a huge chunk of masonry which must have taken quite some effort to get to the stile. Martin reported the faults and was able to meet the Rights of Way Officers for Oldham and Rochdale on site to discuss the obstructions. 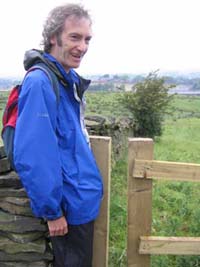 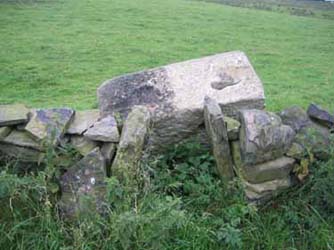 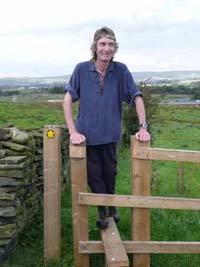 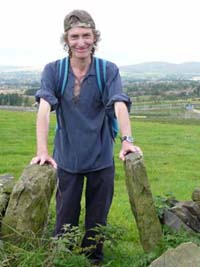 Praise must go to both authorities in their speedy resolution of these footpath faults. Could this be a record or do you know of an authority that can beat this record.

Many thanks to Martin another “Success for PNFS” 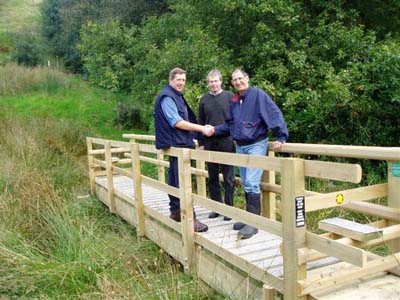 A new footbridge near Stilesmeadow Farm in Bosley was opened on 8th October 2007, with the full cost being funded by Peak & Northern Footpaths Society. “The bridge is on the only footpath linking Bosley to Wincle Minn, and beyond” commented Barry Poole (pictured left), from Cheshire CC. “There is a steep sided valley with a small stream at the bottom. It is a boggy area and we have had complaints from walkers that it was difficult to get across without sinking in the mud.” At the hand-over ceremony, David Bratt (right), PNFS chairman said “the Society has received a number of legacies recently which has allowed us to make this donation. The conditions on this footpath have been unacceptable for some time and we are delighted to be able to resolve the problem by working in partnership with the landowner, John Bailey (centre), and Cheshire County Council. It is the only footpath in the locality and provides a very important east-west link in the network”