Terry Norris, our footpath officer in Calderdale has been exerting pressure on the local authority there for two years to sort out numerous footpath problems on an industrial estate in Halifax. The photographs below show Halifax 247 before & after - the result of effective work by Calderdale's enforcement officer and Terry.  The path now needs reinstating through the field beyond the kissing gate to take the walker into open country and link with paths to the north of the estate.

The razor fence is ugly but inevitable bearing in mind security issues surrounding the factory. At least we are well on our way to having a through route after some 25 years!

A partnership between Wakefield Council, British Trust for Conservation Volunteers and Peak & Northern Footpaths Society has secured the replacement of two dilapidated footbridges on paths in Ackworth and North Elmsall.

Managed by members of the Public Rights of Way Unit in the Council, the bridges were constructed by volunteers from BTCV and funded by Peak & Northern Footpaths Society. 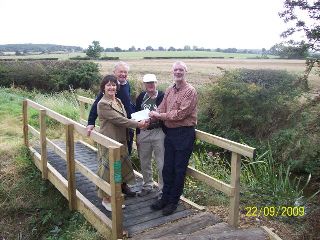 Clarke Rogerson said "We were pleased to be approached by the Council. Improvements to the surface of the path and new signposts have been carried out by the Council as part of the deal".