This section of the website is really meant to be used by the Society’s AO's and Inspectors. Even so it is not password protected and so it can be viewed by anyone with an interest.

Ever since the CROW Act 2000 introduced a definition of 'Restricted Byway' to replace the unsatisfactory 'RUPP', there has been a concerted programme of activity by the 4x4 lobby to upgrade as many RUPPs as possible to BOATS. The cut-off date for these applications has long since passed, but those applications that were already in process will still be determined. Derbyshire has a significant backlog of these modification orders. The Society in Derbyshire has been promoting the use of TRO's (Traffic Regulation Orders) if a modification order is made, to protect the integrity of these important green lanes.

One specific example is at Eyam & Eyam Woodlands where the Society made representation to Derbyshire CC requesting a Traffic Regulation Order be made to protect a BOAT. Derbyshire CC resolved on 29th March 2007 that a TRO would be made to prohibit driving at Eyam & Eyam Woodlands. This is a landmark and the Society will now encourage Derbyshire and other authorities to adopt this approach in future.

The next representation is likely to be in relation to a recent decision concerning an upgrade to a BOAT from Beresford Dale to Wolfscote Hill in Hartington Town Quarter. The circumstances surrounding this BOAT are remarkably similar to those at Eyam. 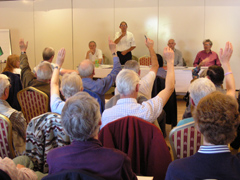 Our latest conference was held in Stockport and a record number of 74 delegates attended. Included in this number we welcomed some new or prospective Inspectors. A couple have since confirmed their interest by becoming Inspectors! This conference was given over entirely to looking at how the Society has been working and how it should organise itself for the future. Only our work with the Public Rights of Way Network was considered.

The conference was asked to vote on two very important questions …..

‘Does the Society need to change the way it works?’

‘Should the Society adopt the proposed new flexible model?

The proposal was summarised in a ‘Statement of Intent’ that had been circulated prior to the conference …..

“It is the intention of the Society to decentralise, where possible, the assessment and decision making on all matters related to the Public Rights of Way Network away from Taylor House.

Over time this will be achieved by appointing one Area Officer for each ‘Authority’ within our area, with full delegated authority and decision making capability, currently undertaken by the Assessors at TH.

The Assessor role will continue for any ‘Authority’ where an Area Officer has not been appointed and will help support Area Officers in the future.

The role of Inspectors will continue, with only minor changes, they will report either to an Area Officer or to Taylor House as required.”

One important aspect of these changes is that if any of our volunteers do not want to change what they do then they can carry on as they are.

Given such a clear mandate, the conference then went on to look at the detailed implementation plans and the support that will have to be provided to the new Area Officers. The programme of work will last for at least two years but it will start in January 2007 with …..

* the first 5 Area Officers in the pilot

Throughout 2007 and 2008 there will be extensive evaluation of the new ways of working before further Area Officers are appointed. This was an excellent conference that was enjoyed by the delegates and confirmed just how fortunate the Society is to have such enthusiastic and knowledgeable volunteers.