The Peak and Northern Footpaths Society is currently actively participating in the Lost Ways project. This involves collecting evidence that public rights of way exist, even though they are not recorded on the definitive map. This evidence can be found in historic documents, but also in many cases it is helpful if it can be supported by evidence of use of the routes. The evidence will be submitted to the highway authority in the form of applications to make definitive map modification orders. If such orders were made and confirmed, the paths would be added to the definitive map and would then be safeguarded from the extinguishment of unrecorded rights which is due to happen in 2026. The authority would also then have a duty to ensure that the paths were open and usable by the public. Two such unrecorded paths are in Cromford parish – they are shown on the map below: 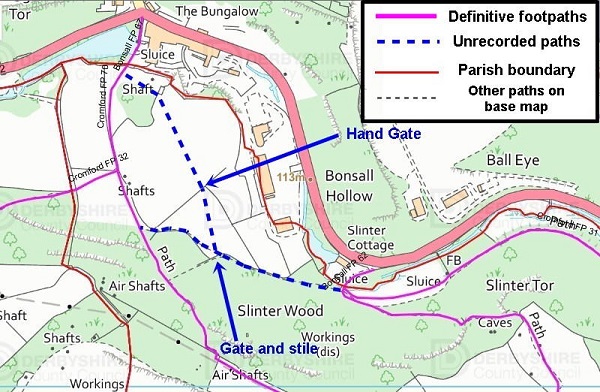 If you have used either or both of these paths at any time, we hope that you will agree to complete a “Rights of Way User Evidence Form” to describe your use. If you can do this, please will you contact the Society by email lost-ways@pnfs.org.uk

You will then be sent an evidence form with a map attached and full instructions about filling in the form. Any evidence of use would be very helpful in securing the legal recognition that these paths are public rights of way.

Due to the Covid 19 Epidemic