“In 2002, New Mills Town Council applied to Derbyshire County Council (DCC) for a Definitive Map Modification Order (DMMO) to add a public bridleway to the Definitive Map & Statement (DM&S) for the parish. Nearly 10 years passed before DCC decided that the user evidence warranted a DMMO for footpath, not bridleway”. 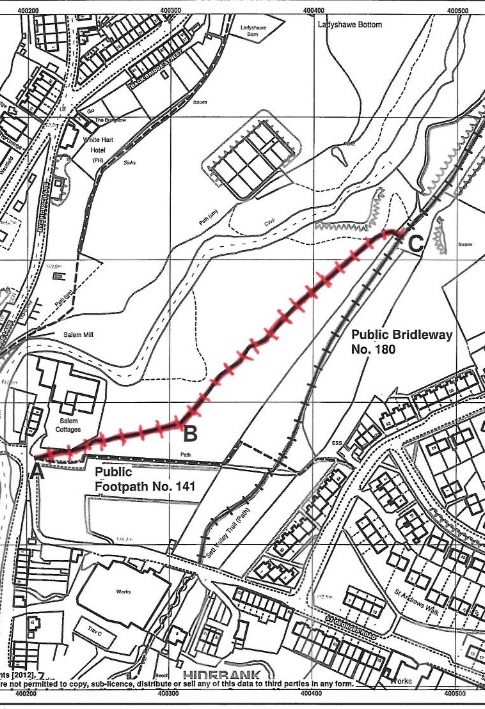 “This Society welcomes new additions to the DM&S but objected to the Order on the grounds that the Order was defective in its use of the word “approx.” to describe the width of the footpath in the Order Schedule Part 2. This flies in the face of central government advice to Order Making Authorities and PNFS felt obliged to try to correct this”.

“Fast forward five years, and due to concerns over whether users of the path had wandered around the area rather than sticking to a defined route, DCC decided to adopt a neutral stance at any public inquiry rather than, as normal, making the case for confirmation in the face of the landowners objection to the Order”.

“New Mills Town Council threw in the towel on hearing this, as in normal circumstances the applicant would be expected to make the case for confirmation if the Order Making Authority was staying neutral. I offered PNFS assistance in presenting the case at the public inquiry that had been called in August (later postponed to November due to the Toddbrook Reservoir crisis at Whaley Bridge). The Town Council never replied to my emails or phone calls. I felt strongly that the case for confirmation should not go by default”.

“I started contacting witnesses who had completed evidence forms, in some cases nearly 20 years ago. Not surprisingly, some witnesses had moved away. One gentleman had died, his widow told me. Others offered to come to the public inquiry to give evidence when I promised to be there to assist. In the end, six witnesses said they would come, although only four turned up on the day”.

“What tipped the scales in our favour was that very late in the day, the local horse riding group – Dark Peak Bridleways Association (DPBA) heard about the public inquiry and quickly found witnesses who had ridden horses along the route over several decades. They turned up in force at the inquiry and gave evidence of use which, together with my witnesses who I guided through their evidence, convinced the inspector that the route had been dedicated as a public bridleway satisfying all the criteria set out in section 31(1) of the Highways Act 1980″.

“The landowner’s vain attempts to dispute the evidence in cross-examination of witnesses, or his own evidence on which I cross-examined him, proved utterly futile. He only bought the land for development after the application was made in 2002. His predecessor as the landowner had done nothing to prevent or dispute use of the route. Therefore, use of the route as of right had led to a presumption of dedication which the landowner had been unable to rebut”.

“The confirmation has to be advertised again as it was originally for footpath not bridleway but this is a legal formality which will only delay absolute confirmation. The inspector concurred with PNFS about the changes needed to the Order itself regarding the use of the word “approx.”, so we have had a very positive outcome”.