A Brief History of the 'Benfield Path'

This article is from Signpost, Summer 2012

This Society was born out of the struggle to save the 'Snake Path' between Hayfield and the A57. Since then the Society has fought, and still fights, countless battles to safeguard our public rights of way. Most do not make the headlines, but for a brief period in the 1920s the 'Battle of Benfield' was headline news in no less a newspaper than the Manchester Guardian. Why? Where is Benfield?

Far Benfield lies on the southern slopes of Werneth Low where the Gigg Brook drains into the Etherow near Compstall Bridge. A footpath links Far Benfield at SJ961.917 with Hyde's Farm across the steep-sided clough that Gigg Brook flows down. In the 1920s the footpath's very existence was challenged by local landowners. 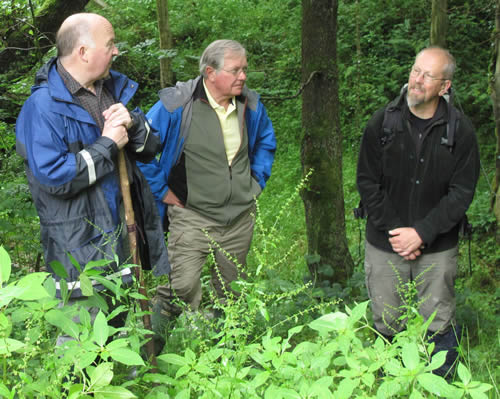 From the Society's copious file on this footpath, we know that the footpath was regularly blocked off with barbed wire and with other obstacles. Walkers would tear down the obstructions and reassert the right to walk it. In time, the matter became a local 'cause celebre' and this Society became involved in 1924 through our link with the affiliated Hyde & District Footpath Preservation Society. Meetings were arranged with the local Compstall Rural District Council, who had powers as the highway authority for footpaths, to try to convince them that the footpath was public. Evidence from the 1841 Tithe Map was put forward. However, the landowners who had been invited to attend the meeting boycotted it. Compstall RDC refused to act on the public’s behalf and suggested arbitration between the parties.

The first mass walk to highlight the situation took place in June 1925 with 200+ people, including PNFS members, walking the path and removing or demolishing obstructions. However, the obstructions quickly reappeared despite further walks organised to remove them; and with Compstall RDC refusing to act, an impasse had been reached. 1926 came and went without the situation changing so this Society helped to organise further mass protest walks for Saturday March 5th and Sunday March 20th 1927. These had the effect of bringing the landowners to the negotiating table. A proposal to place all the evidence for the path’s legal existence before an independent legal counsel was accepted by this Society and others, but not by the landowners, so 1927 ended in frustration. 1928 was spent gathering further evidence to support our contention that the path was a public right of way. This was placed before legal counsel, whose opinion was that it demonstrated the public’s right to use the path. His advice was to issue a summons on the landowner for obstructing the path.

This was done in 1929, and the case reached Stockport Borough Police Court in December of that year. The magistrates accepted the testimony of witnesses that the footpath was public through long usage and the landowner was fined 40/- old money. This Society’s legal costs exceeded £50 but as that year’s Annual Report pointed out, it is knowing that the Society is willing to back negotiations with legal action where required that makes for an effective Society. Prescient words and words still as relevant today as they were over 80 years ago.

One mystery remains though. The landowner agreed to the Society erecting a bridge across the Gigg Brook to facilitate use. However it never happened. Maybe it’s now time to make good the unfinished business. Both as a tribute to the Society’s determination to stand up for the public’s right to walk our footpaths, and in memory of Adrian Littleton who embodied that determination in everything he did for the Society for so long.