What Am I Allowed To Do On A Public Right of Way?

This article is from Signpost, Autumn 2013

There is a footpath along the river Derwent in the Peak District National Park. It runs along the east bank from Froggatt village towards Calver Mill. A large wooden sign fixed to a tree tells you that on this stretch of river the fishing rights belong to an angling club in Sheffield. There follows a long list of banned activities including swimming, canoeing, picnicking. I know of other similar signs elsewhere. A notorious example used to exist, and probably still does, above Hathersage in a so-called “Conservation Area” crossed by public footpaths. Unsuspecting users, including friends of mine, have been approached by the owner whilst sat on the footpath and told stopping to have a bite to eat is forbidden. A third example is a sign on a public footpath running through the arches of the Marple Aqueduct carrying the Peak Forest Canal across the Goyt Valley near Watermeetings Farm. (See photo below). I could go on. You probably know of other such signs elsewhere. 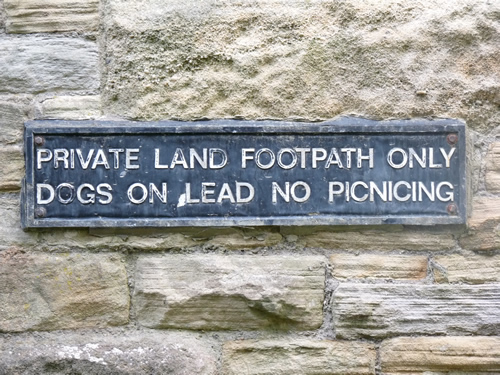 The question is: “Are these signs correct in law? Are some activities allowed on a public right of way and not others? What does the law say I can do?” The 'Blue Book' (“Rights of Way: A Guide to Law and Practice”) states that the public's right over a highway (including public rights of way) is a right of passage for the purposes of passing and re-passing and for purposes reasonably incidental thereto (my emphasis). If this is exceeded, then you become a trespasser even if you remain on the highway. In 1893, an early animal rights activist called Harrison tried to disrupt the Duke of Rutland's grouse shoot on moors near Sheffield by walking up and down the right of way waving flags and shouting. The Duke's gamekeepers were ordered by the Duke to restrain him. Harrison sued for assault. The Court dismissed his case, saying he had exceeded what he could legitimately do on a public highway. In 1900, a journalist called Maisey used a public path to walk up and down making notes to assess the performance of racehorses on adjacent gallops owned by Hickman. The Court of Appeal held that Maisey had exceeded his rights and was a trespasser. Lord Justice Smith summarised his view of the extent of the public's rights thus: “If a man, while using a highway for passage, sat down for a time to rest himself, to call that a trespass would be unreasonable. Similarly, if a man took a sketch from a highway, I should say that no reasonable person would treat that as an act of trespass”. From this we can assume, with some degree of confidence, that sitting down to rest, have something to eat, take photos or enjoy a view are legitimate uses of the public highway.

In conclusion, signs like those on the river Derwent footpath or on the footpaths above Hathersage or below the Marple Aqueduct are, at best not the whole truth, at worst downright misleading and designed to intimidate users from carrying on perfectly legitimate activities connected with using the public highway. The key to all this is whether what you do is “reasonable” within the context of your use of the public highway and whether you are doing it on the public highway itself, and not on land adjacent to it which is private. If you think such signs as the ones highlighted above are an attempt to deny what is “reasonable”, report them to this Society in the usual manner of any misleading or intimidating sign.