The Society's Annual Report for 1929 reported on the success of a private prosecution brought by the Society against the person responsible for obstructing the public footpath commonly known as The “Benfield Path”. The legal bill for the Society was £50 14s 6d.

The prosecution did not prevent successful negotiations taking place between the Society and the convicted landowner concerning the marking out of the path with stakes and a Society signpost and agreement on a Society-funded bridge across the Gigg Brook. However, the 1930 Annual Report reported, with regret, the failure of the project due to the landowner on the Benfield side of the brook not consenting to a bridge.

Now, 83 years on, the Society can report to its members and the wider walking public that renewed negotiations with the present day landowners has led to not only a Society-funded bridge across Gigg Brook to be dedicated to the memory of the late Adrian Littleton, but further work on the approaches to the bridge on either side. This additional work has been paid for in part by additional funds released by the Society and a donation by the Manchester & High Peak Area of the Ramblers' Association. Stockport MBC have found the money for the rest of the work out of a tight and diminishing public rights of way budget. In total, for a Society outlay of over £7,000 we have attracted match funding from elsewhere to cover a bill for the work in excess of £20,000. Particular thanks should go to Neil Collie, the Society Bridges Volunteer and Ernest Nama of SMBC Public Rights of Way for keeping the project moving forward despite a difficult location to deal with. Our gratitude also goes to Mr. Bennett and Mr. Suppan, the two landowners involved, for their consents.

The photos will give the reader an impression of the works carried out to make accessible what was, until a few months ago, a completely unwalkable footpath. Some minor works remain to be done. Waymarking the route, especially on the eastern side is needed to minimise inadvertent trespass off the definitive line. A minor legal diversion is pending to make the definitive line match the walkable line. However, we can congratulate ourselves that the ‘unfinished business’ of 1929 is nearly finished. A ‘hand over’ ceremony will happen in the New Year and a more private ceremony in the presence of Adrian's family will take place in the spring. I am leading a Society Short Walk taking in this footpath on April 9th 2014. Watch the website or newsletter for details. 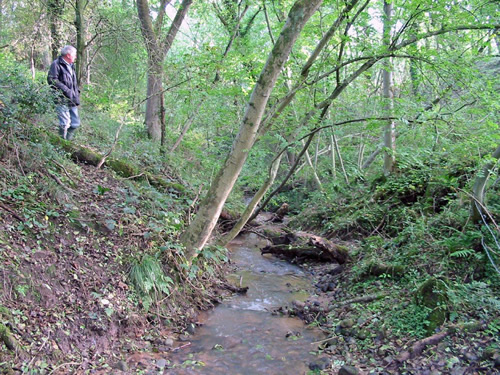 John Broadbent surveys Gigg Brook before the bridge was installed 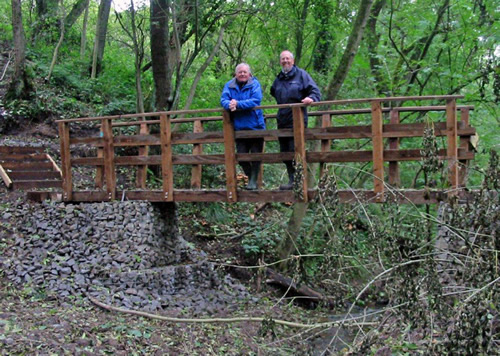 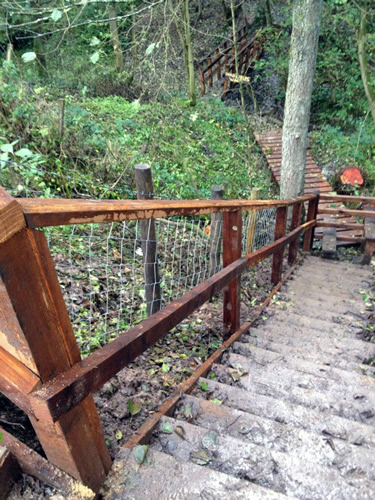