This is another story from Chris and John which started last year when Chris found the bridleway was both obstructed by farm machinery and so boggy as to be unusable for walkers or horse riders. 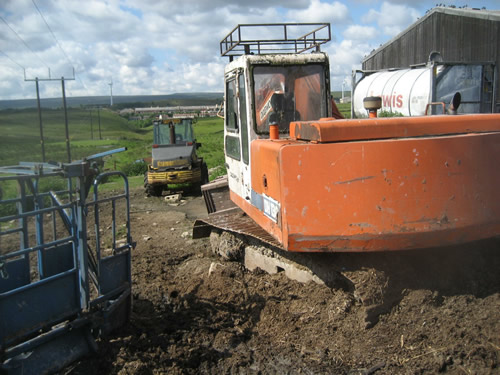 After John had served notices on BMBC under s.56 (out of repair) & s.130A (obstructions) of the Highways Act 1980, a site meeting was held last September between the landowners, Barnsley MBC staff, John and a representative of the British Horse Society. At the meeting they thought a compromise diversion had been agreed to move the affected section onto firmer, drier ground.

Unfortunately this fell through as the landowners didn't want to pay the cost of the Diversion Order, which is an all too familiar situation.

John gained additional authority to take the case to magistrates' court and when he told BMBC this he was asked to hold back on litigation as agreement had been reached with the landowner. This involved the landowner digging a drainage ditch in return for BMBC supplying him with road planings to build the surface of the affected section up above the surrounding swamp. The farm machinery will also be removed to restore the 9 feet legal width of the bridleway.

This is an ongoing story and we hope to have good news in a future edition of the newsletter.