‘In 2004 a footbridge costing £130,000 was installed spanning the river Trent, near its confluence with the Tame at Alrewas in Staffordshire. The principal source of funding was the Aggregates Levy Sustainability Fund administered by the Countryside Agency. At the time the Burton Times said "It has become Staffordshire’s key to the popular River Tame and Trent footpath, which runs from Birmingham to Hull’. Ken goes on to report that ‘Ten years on the project appears to have stalled although some river paths such as the Trent Valley Way have been created as stand alone routes. Sadly Mythaholme Bridge stands in isolation at SK 191151 on the edge of the National Memorial Arboretum with no connecting right of way.’

Harry Scott reports that the society has been consulted over the years and it may be many more years before this anomaly is resolved as there are no legal means at our disposal to push Staffordshire to create new paths where none have previously existed. 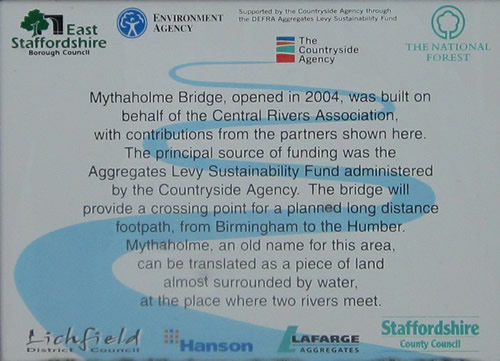 Next: News from the Wirral