I have some very good news Mike Hoare, a new member, stepped forward just before the AGM and offered, not only his own services with signpost maintenance, but those of his friend Peter Ash. I’ve spoken to both of them and equipped them with paint, wire brush and thinners, together with a list of 55 signposts which need their attention in varying degrees. They should be appearing soon at a signpost near you, so, if you see them, say “Hello” and give them our thanks. 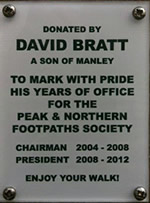 8 more new signposts are in the pipeline.

On the maintenance front :