Chapel Gate - the controversy rumbles on. 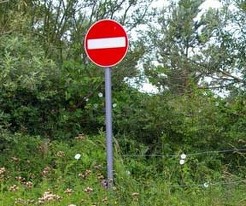 The Byway Open To All Traffic (BOAT) known to all as “Chapel Gate” has been a source of contention for a decade and longer. Originally put on the Definitive Map & Statement as a public bridleway, it was considered by many vehicle enthusiasts to be of higher status as an old road connecting the Edale valley with Chapel-en-le-Frith, as its name implied. An application to upgrade it to BOAT status in the early 2000s went to public inquiry and the inspector appointed by the Secretary of State agreed with the vehicle users that the bridleway did carry vehicular rights. As a route used predominantly by walkers and other non-motorised users, it fitted the legal definition of a BOAT and was thus upgraded.

The poor state of the route was felt by many people to render Chapel Gate unfit to carry vehicles. The National Park Authority came under pressure to use new legislation passed in 2006 to impose a Traffic Regulation Order (TRO) prohibiting vehicles from using the route. The tortuous story of how a permanent TRO was finally imposed after first being overturned in the High Court is too long to be told here, but anyone who thought that this was the end of the story has been proven wrong.

Derbyshire County Council as Highway Authority decided that long-overdue repair work was needed to make the route more ‘fit for purpose’. However, what seemed to be a routine decision has brought down a storm of complaint from mountain bike user groups who felt that their needs had not been considered. The route is seen as a classic challenge for off-tarmac cyclists because of the topography, scenery and also because of the lack of maintenance over many decades. Repairs and resurfacing threatens, in their view, to endanger that sense of adventure which using the route engenders. The County Council has suspended further repair work until it has consulted on whether to proceed or amend or even scrap the work planned.

This Society has been approached by both the mountain bike lobby and the County Council seeking its opinions and support. I have responded on behalf of the Society that we are firmly on the side of the County Council in its efforts to repair and maintain the route as its statutory duty compels it to do. In our view, whatever the shortcomings may have been in terms of pre-work consultation, the public highway network, including public rights of way, is not intended to provide a challenge for a class of legitimate user over and above the interests and rights of other users such as horse riders. A public highway is for travel from A to B and beyond. The gradients and prevailing weather may be challenging, but leaving a highway in poor repair to provide a challenge is not what this Society believes is either morally or legally correct. We hope the County Council gets this message loud and clear and completes the repairs it had commenced before all this controversy erupted.

For further information on the Chapel Gate TRO and to see a map of the route go to:

Next: Threatened path in Sandbach saved by Society and local Ramblers Group