The case of two footpaths at Far Cown Edge farm north of Rowarth. 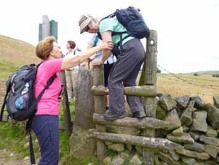 The photograph of the stile on New Mills 6 (SK015906) with the people getting over it was taken by me whilst leading a Sheffield CHA Club walk last summer (they are an affiliate of ours). One of the Society’s signposts can be seen behind the woman on the left.

This has a happy ending as the DCC officer has persuaded the landowner to remove the fence blocking off the stone stile behind the wooden ‘stile’ the woman is climbing over. 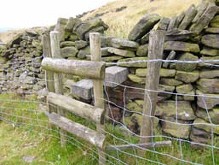 The first photo is mine of a fence ‘stile’ put in front of a perfectly functional stone step stile.

The second one is the DCC officer’s photo of the aftermath of him talking to the landowner (a different one to FP6 I think).

Not quite what I had hoped, but at least an improvement on what was there before.

Next: Praise from Kate Ashbrook