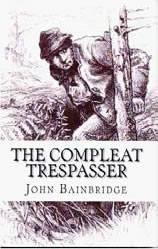 According to Bainbridge, too much of England is privately owned and barred to the public. In this book he sets out to convince us that it shouldn’t be; that the right to roam should be universal; and that the way to achieve it is to carry on walking wherever we please, with or without permission and with little consideration for others’ feelings.

He describes with authenticity and some fine writing how much he has enjoyed some scenic walks and explains how he would like to do more of them. Being authentic, this desire comes across as the main pillar of his argument. The other pillars come across as less authentic, less substantiated and much flimsier: some shallow historical material; the bullying tactics of some landowners and gamekeepers (undeniable, but piecemeal); the author’s exasperation with the softly-softly approach of footpath preservation societies and the CRoW legislation.

The book does make you think about the right to roam, but it would make you think much more deeply if it gave fair consideration to other points of view. Farmers and other landowners don’t necessarily sit on tracts of land just to stop others enjoying it: they use it to produce the country’s food and preserve its landscapes. How can they know whether the stranger walking through their crops or lurking in their woodland by night is simply enjoying the countryside or out to cause mischief or steal valuable stock or machinery?

The author doesn’t seem to recognise that societies like PNFS (which isn’t mentioned), the Ramblers and other bodies working behind the scenes to promote access may use less dramatic tactics than Rothman and other mass trespassers, but could be said to have achieved a good deal more by negotiation than by confrontation. They recognise that many landowners feel they are guardians of the land, holding it in trust for future generations and concerned to care for it rather than exploit it. Unlike Bainbridge, they understand that it is in the interests of both walkers and landowners to respect each other’s rights and needs.

If the author were to bring out a second edition, he might like to consider editing the structure and layout as well as balancing the content. The rather muddled ‘arrangement’ of chapters and paragraphs, with inconsistently weighted headings, doesn’t make for an easy read or coherent argument. It’s a rambling book, certainly, but not really in the sense intended.