An example of “Lost Ways” in Cheshire East

I decided to look into an area quite near to where I live and where I often walk for evidence of “lost ways”. It is in the parish of Pott Shrigley, near Bollington in Cheshire East. I have often thought that there is a big gap in the rights of way in that area, resulting in a walker being forced to use roads where there are no through routes by footpath. 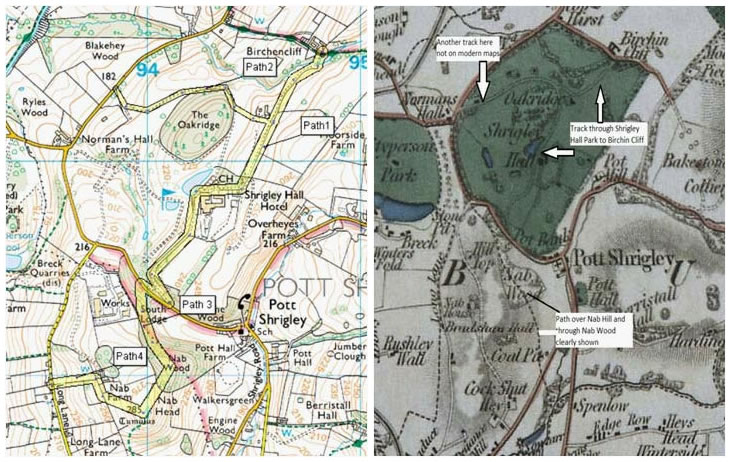 I picked out four potential routes to research further. The map on the left is a modern OS map and to the right is Bryant’s 1831 map of Cheshire with the same four paths shown. The existence of the paths marked on ancient maps is evidence that the routes were known as long ago as 1831, but not that they were rights of way. I have therefore consulted the Sarah Bucks and Phil Wadey publication (referred to in the previous article) to guide me through the process of looking for documentary evidence which will be sufficient to confirm (or disconfirm) the status of the routes as having or not having public rights of use associated with them.

Standard documentary evidence can include Turnpike records, Enclosure records, Tithe records, Parish maps, Railway and Canal records, and Highway records. I will need to visit Cheshire’s Records Office to determine whether or not any of these sources of evidence can be found to support the claim to restore the paths I have identified.

Also useful as a guide to reclaiming so-called ‘Lost Ways is the IPROW web-site.

Why not do some footpath research of your own? My project has only just begun and I do not know what the chances are that I will be successful, but I am looking forward to finding out, and, with some luck, I might be able to contribute to restoring the record in just one parish in the Peak and Northern area. Perhaps you could perform similar investigations in your area, which would be invaluable in helping to “restore the record” and which will hopefully prove enjoyable as well. The Society can offer you support and advice, so please let us know if you decide to join the campaign to save lost rights of way.