Access you won’t see on any Ordnance Survey Map 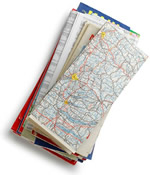 Users of the path network usually rely on their trusty Ordnance Survey map, either in paper form or some electronic derivative. However, that is not the full picture. There are many permissive footpaths and bridleways available to walkers, but unless you know where to look for them you will never be able to take full advantage. Successive governments, through various schemes administered by what was the Countryside Agency and is now Natural England, offer incentives to landowners to manage their land in an environmentally sensitive fashion. One option for landowners is to offer either permissive linear routes, or areas of open access. In return, the landowner is paid an amount per metre of permissive route for a 10 year period with an option to extend for a further 10 years.

How does the average path user find out about these available routes? Today, the easiest way to find out if there is a route near where you are planning a walk is to go on the Natural England website and use the menu for the county you are living or walking in. The link to this web- page is given at the end of this article.

Why are these routes not shown on O.S. mapping? Ordnance Survey consider these routes too vulnerable to being closed at the end of the 10 year agreement, which would present difficulties for them when publishing maps which might only be revised periodically in less popular walking areas. Showing routes no longer available to the public could cause trouble for landowners and walkers. The closure of some paths at the end of a particular agreement has caused problems in some areas, as locals who have been using a particular path for 20 years or more cannot understand why the path has been blocked off. There are permissive routes shown by Ordnance Survey, but these were created under different agreements which last longer, so Ordnance Survey does show them. Some counties are well endowed with these ‘ghost’ paths, Derbyshire for example.So try the link and happy discovering!

Next: Self-help maintenance of paths