In Signpost 50 (Jan 2016) Rhoda Barnett highlighted the challenge to find ‘Lost Ways’ before it is too late and David Gosling provided an example of lost ways in Pott Shrigley near Bollington. Rhoda’s article also suggested a training course on ‘Lost Ways’. This was duly organised and the Quakers Meeting House in Manchester was the venue for a very interesting, informative and inspirational session on 9th April 2016.

Training was provided by Sarah Bucks and Phil Wadey (Authors of the book ‘Rights of Way: Restoring the Record’). There are literally hundreds of unrecorded public rights of way (PROW) across the country; unless these are restored to the record before the 1st Jan 2026, there is a danger that they will be lost forever. These lost routes include totally unrecorded ones and ones that have been recorded as footpaths which should have higher rights (e.g. bridleway status). It was also noted that the objective is simply to ensure that existing PROW not previously recorded, or which have been recorded incorrectly, are included on the Definitive Map.

Phil and Sarah outlined their ‘route-led’and ‘systematic research’ approaches to identifying lost ways. An example of the route-led approach involves identifying missing current links shown on old maps, while the systematic research approach might involve systematic comparison of the current map with the Inland Revenue Valuation map of 1910. Phil reviewed more than 20 sources of documentary evidence of lost ways including old maps, tithe records, inclosure records, OS 1st edition maps and area books and 1910 Inland Revenue valuations. He also described a star rating system (ranging from 1 to 5 stars for most documents) used to denote the strength of evidence provided by each of these sources. Phil explained that the criterion for recording rights on the Definitive Map is the normal civil law test of ‘balance of probabilities’ and that his criterion for submitting an application was that his research indicated that the route had seven or more stars. 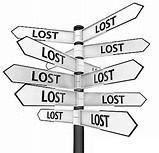 In Rainow, near Macclesfield, comparison of current and old maps reveals a number of unrecorded, or under-recorded routes. For example, books such as The South West Peak: History of the Landscape (Eric Wood, 2007) describes a Saltway from Macclesfield to Harrop, Charles Head and Kettleshulme. Although parts of this route are recorded as footpaths, there are sections that appear to be incompletely recorded. Further research is likely to reveal other routes that have not been correctly recorded and Phil and Sarah provided a comprehensive guide to evaluating and collating the evidence, along with practical guidance on preparation and submission of Definitive Map Modification Order applications.