The Role of the PNFS Inspector 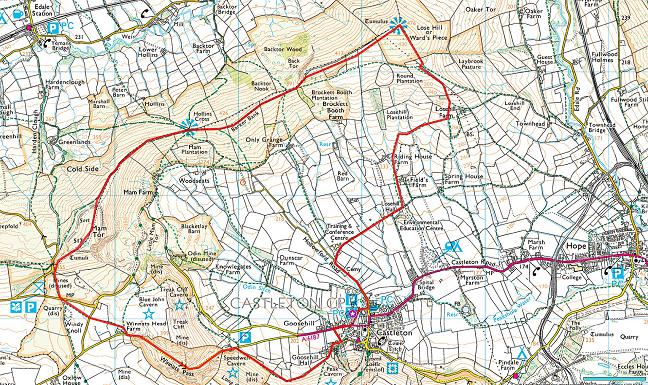 The Society currently has 95 footpath ‘inspectors’ - volunteers who check Rights of Way (RoW) in a parish, or in several parishes, which they have agreed to ‘inspect’. Approximately 30% (440 parishes) of the PNFS geography has designated inspectors. Although more inspectors covering more areas is always desirable, it is worth remembering that in 1970, there were only 17 inspectors, while back in 1960 there were as few as 10. So in this respect, the Society is stronger now than it was 40 or 50 years ago.

So what do inspectors do? They walk the paths and bridleways designated as rights of way in their parishes over a two year period and identify problems, or ‘faults’. A fault could include: a path blocked by vegetation; a broken stile; or a footpath with no sign from the highway. Faults are notified to the relevant highway authority (HA). A copy of this contact with the HA is sent to Taylor House so that the office can track reported problems. 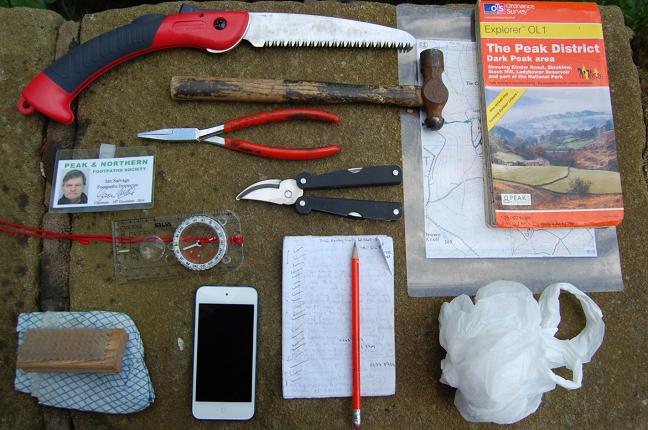 Many inspectors also carry a ‘toolkit’ with them to record faults or take simple remedial actions. While what is carried will vary, above is an example of what you might find.

The Society asks inspectors to use a standardised report form and to include a digital photo if possible, simplifying fault re- cording and enabling more consistent records.

At Taylor House, the ‘faults team’, led by Hilda Bowler, still receives fault reports with no grid reference or path number, making its task much harder. Most inspectors now use email to notify faults and their phone to photograph the fault.

Discretion over what to report is important, especially as RoW staff use strict criteria to prioritise which faults they address. A stile that is fine for most people, but difficult for less able walkers, or a path that is muddy after a wet spell, but satisfactory at other times, are examples.

Inspectors use their judgement on whether to report such faults. The absence of way-markers is another difficult area, since these are not required by law, but can be very useful to walkers. 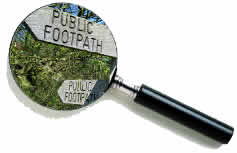 Serious issues should always be reported, especially faults which meet the following criteria:

All inspectors use these criteria to determine the most serious faults and the Society will also consider serving a notice to the relevant HA. This may be followed by further legal action.

Inspectors are not left entirely to their own devices, though they mostly work independently, in their own time and at their own pace. They can attend a training session held annually in March, and they have an experienced area officer for difficult cases and from whom they can get legal advice. If necessary, area officers can refer cases to the Courts and Inquiries Committee which includes the most experienced officers in the Society. It is this Committee which decides whether to take legal action against an authority.

Inspectors are also asked to check sites where the Society has been notified of a creation, diversion or extinguishment order. Sometimes such orders are within the designated parishes of the inspector, but sometimes they are in areas where there is no designated inspector.

The Equality Act 2010 provides for the rights of elderly and disabled walkers. The Society has declared that it will oppose any action of an Authority which does not comply with the Equality Act.

Inspectors are encouraged to work supportively with RoW staff in the Highway Authority. Mostly, we are all on the same side, wishing to preserve footpaths and bridleways which form what Robert Macfarlane has called the ‘labyrinth of liberty’. Attendance at RoW Forums is a useful way to discuss ongoing issues. But sometimes the RoW staff hold different views and priorities from PNFS. In recent years, local authority cutbacks have started to erode RoW staff numbers, often resulting in slower response times and delays in getting the problem resolved. This is one reason why an inspector requires patience. We have to take the long view on protecting and maintaining the network of footpaths in our area.

In order to build a better picture of the condition of paths, inspectors will soon be asked to record and note the state of all paths they walk, whether there is a fault or not. A new database, being built by a PNFS member Roger Fielding and to be piloted later this year, will then record the information. Helpful information is also available to Inspectors on the PNFS website, on its Facebook page and via the Inspectors’ electronic newsletter.

So the role of the inspector is always evolving and modernising, but there is a continuing commitment to the founding ideals of the Society. To quote the very first Annual Report in 1894:

“The preservation, maintenance and defence of the rights of the public to the use and enjoyment of public highways, footpaths, bridle- paths, bye-ways, and other ways, vacant spaces, waste lands, and roadside slips, and to right of recreation over commons in the Northern and Midland Counties, particularly in the Peak District.”