Robert Fysh was first introduced to the PNFS by his fellow steam railway enthusiast and footpath champion, Donald Lee. Joining in the early 1960s, he soon found himself volunteering to be the Footpath Inspector for Trafford. PNFS did not have the central Taylor House office then, so monthly Inspectors’ meetings were held in the Friends Meeting House, near St Peter’s Square library, Manchester. Pre-dating internet, emails and blogs, communications were largely face-to-face, with frequent meetings essential to keep everyone updated and in synchronisation with each other. 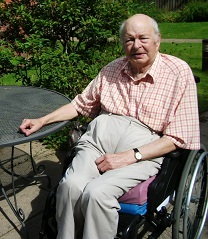 Footpath Inspectors then spent more time addressing specific problems than checking every path in their “patch”. Robert soon utilised fellow walkers in Trafford, especially in Timperley where he has lived all his life. He designed a form, allowing them to provide the details to present a problem, in a lucid manner, to the local highway authority. Robert’s attention to detail, developed over 39 years as a draughtsman, came into play here and a more comprehensive and easy to complete form is difficult to imagine.

The Society has a record of attracting people with specialist skills and Robert soon got to know the Society’s Legal Adviser Adrian Littleton. The two gave evidence at many Public Inquiries, complementing each other with Adrian’s expert knowledge and skill, and Robert’s dry wit and quick thinking when challenged by opposing witnesses.

When the Society moved into Taylor House, there was more opportunity to co-ordinate paperwork and, as a cost saving measure, Inspectors started delivering the annual report by hand to their local communities. Always one to chat, Robert quickly found out that, for many PNFS members, the annual report was their only communication with the Society. At one of the monthly meetings, he proposed that there should be a more frequent communication with members and, following his suggestion, “Signpost” newsletter was born in October 2000.

As the Society matured, the desirability of a logo became apparent. Chairman Leslie Meadowcroft instigated a competition to find a suitable offering. Robert’s stone wall with stile and finger-post (stiles were not out of favour in those days) reached the shortlist, subsequently being voted the outright winning design. That draughtsman background again! Today’s design is only slightly modified, using a pinch stile to align with our aims of greater accessibility.

Our PNFS green-painted metal signs not only inform walkers, but also advertise our Society. Robert promoted these within his local walking group, the Altrincham & District Walking club, helping the Group fund five PNFS signs in popular hiking territories within the PNFS’s boundaries, each one with dedications to club walkers.

Robert Fysh has contributed hugely to the development and promotion of our Society. He now enjoys his retirement at the Woodend Care Home in Altrincham, following a fall that resulted in him needing to use a wheelchair. The quick wit is still there though, the memories are as clear as a bell and he has a continuing interest in rights of way preservation and protection.

Robert, we salute you and thank you for your invaluable contribution to our Society over many years.

Next: Cycling - A Personal View