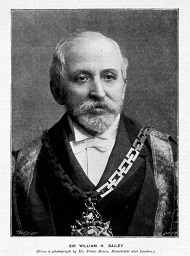 When our Society was founded on 16th August 1894, its immediate priority was to establish the existence of a right of way from Hayfield to the Woodlands at Ashopdale – often referred to as the Snake Path. This not inconsiderable task was successfully accomplished in less than 3 years, with a formal opening ceremony on 29th May 1897 by the Society’s President Sir W H Bailey.

Life may be very different 120 years on from that opening ceremony, but at its core, the work of the Society to “monitor, protect and improve the footpath network for the benefit of all” is fundamentally in line with our original objectives. The characteristics of the approach that we followed in the 1890’s – seeking resolution by tact, diplomacy and co-operation, but not afraid to resort to legal action if required – also still holds good today. As the Manchester Guardian reported on 24th September 1896:

“The Peak District and Northern Counties Footpaths Preservation Society has happily succeeded in its first enterprise. The favourite route over Kinder Scout, from Hayfield to the Snake Inn, as been secured for ever to the public…This peaceful victory over the landowners who threatened for a time to close the path…speaks volumes for the energy and tact displayed by the officials of the Society”. 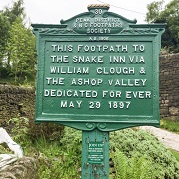 With 2017 marking the 120th anniversary of this auspicious occasion, we are planning to have a celebration in recognition next May. We would like to hold it as close as possible to the date of the original official opening and therefore, it will take place on Saturday 27th and Sunday 28th May. We plan a celebration in Hayfield and a walk along at least part of the Snake Path.

We hope that you will put the date in your diary and look forward to seeing you on that weekend in Hayfield. Further details of the event will be published in due course.

Next: Walking the Write Way