Report on our Half Yearly Meeting 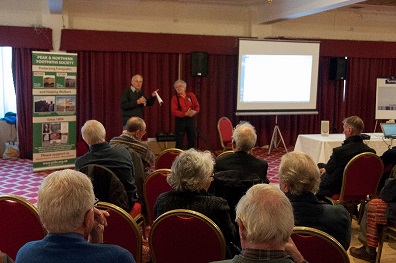 Around 60 members gathered at the Britannia Hotel in Stockport on Saturday 19th November for the Half Yearly Meeting of the Society. Members heard reports of the activities of the Society from various sections and of the financial health of the Society.

Rhoda Barnett gave a brief introduction to a new draft policy related to recording lost or forgotten public rights of way. These ways are ones which are not currently recorded on the definitive map and statement. If the rights existed before 1949, and are not put on the definitive map before 2026, they will be extinguished. The Society intends to work with like-minded organisations and individuals to identify such ways, research evidence for the existence of the rights, and make applications to surveying authorities for the rights to be recorded. The policy has now been agreed by the Society's Trustees and can be found on the web site at http://www.peakandnorthern.org.uk/about-us/constitution.htm

If you think that you could help with this, please do contact Rhoda at rhodabarnett@w3z.co.uk

Rhoda also mentioned that the rights of way provisions in the Deregulation Act 2015 will probably not be in force before mid-2017. These will have a considerable effect on how diversion and other orders are made, and it is intended that more details will be given at the Half Year Meeting in November 2017, by which time, we hope that the Act has made it on to the Statute Book.

Following lunch, during which members had the opportunity to catch up with each other and socialise together, John Mottram of the Edale Mountain Rescue team gave an entertaining talk on the work undertaken by Mountain Rescue Teams. He described some of the more unusual call outs they had attended, the training they receive, and reassured everyone that, if they were ever in a situation where they required the assistance of a Mountain Rescue team, their call would not go unheeded.

The afternoon session was rounded off by the members’ forum, during which the Chairman asked for views on the reduced membership subscription that was offered at shows and presentations as an incentive to join the Society. After some discussion, the view emerged that a reduced first year subscription should be continued. A show of hands indicated the majority of those present would support a more formalised reduced offer, but that the figure may be raised from the current £5. The Trustees will follow this up with a formal proposal at the Annual Meeting.

Next: The Peak District Boundary Walk