On 29th May 1897, the Snake Path, from Hayfield to the Snake Pass Inn, was formally opened by PNFS’s first President, Sir William H Bailey. This had been the first ‘battle’ for the Society, successfully won against the landowners, using tact and diplomacy as the main ‘weapons’. The path was thus ‘secured for ever to the public’.

120 years on, so many things have changed, but the Society still continues to fight for walkers’ rights and the adequate maintenance and management of footpaths. So in recognition of our 120th anniversary, there will be a celebration on 27th May in Hayfield, where the first ceremony took place. 2017 also marks the 85th anniversary of the 1932 Mass Trespass, making this a particularly significant anniversary for Hayfield and its role in the long history of campaigning for access to our countryside.

The main event will be held throughout the day at the Royal Hotel in Hayfield and will feature a host of attractions, making a visit to the village an imperative on that day. At the moment, confirmed guests are Roly Smith (writer, editor and media consultant, living locally in Bakewell and a specialist on the Peak District – see http://www.owpg.org.uk/member-profiles/rolysmith/) and Helen Mort (a poet from Sheffield and recent holder of the Derbyshire Poet Laureate post – see http://www.helenmort.com/).

Other guests have indicated their intention to attend, but as of yet have not committed. Over the coming months, we expect that some of these may confirm. We plan that music will be on offer during the day. In the evening, a band will also be performing at the Royal for those who wish to ‘shake a tail feather’ 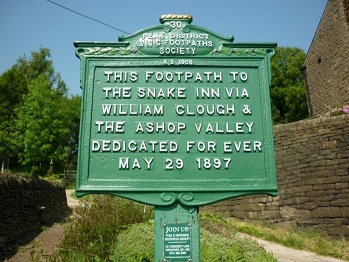 On 28th, two walks will be organised along the Snake Path. Both walks will follow the Path from its start in Hayfield. The first will be a short walk up to the shooting cabin above Middle Moor, returning to Park Hall in Little Hayfield. The longer walk will take in the entirety of the Path from Hayfield to the Snake Inn on the A57 Snake Pass. Return transport will be provided for walkers back to Hayfield from both finish points. Depending on the number of walkers, there may be a wait for the minibus, but fortuitously, both walks have been designed to end at a pub, helping time pass quickly!

We would love to receive items of relevance to the anniversary from Society Members. For example, maybe you would like to write an article or a poem, or create a work of art or sculpture that could be read or displayed on the 27th. Or you might have old items such as newspaper cuttings or other memorabilia relating to the fight for Britain’s network of public rights of way. We would love to hear from you, whether you would be willing to provide any of these, or have any other suggestions to make the day a success. Contact me via email at publicity@pnfs.org.uk, by telephone on 01663 746979, or by post c/o PNFS, Taylor House, 23 Turncroft Lane, Offerton, Stockport, SK1 4AB.

Even if you do not wish to contribute, we would love to see you at the events over the weekend of 27-28 May 2017. So put the date in your diary and come along and enjoy the event.

Next: Replacement of Shelf Brook Bridge