Shelf Brook runs West off Shelf Moor on Bleaklow, joining Glossop Brook in the town of Glossop. In heavy rain, it can become a raging torrent, and even at calmer times, there is a substantial flow in it. The Doctor’s Gate footpath runs alongside the Brook for much of its length. 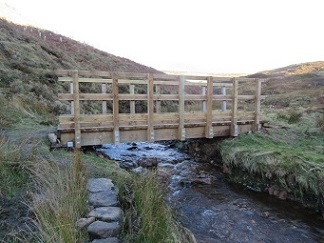 Doctor's Gate is a footpath that climbs from Old Glossop onto Bleaklow. Take the path heading East out of Glossop starting at SK 0457 9482 which joins the Doctor’s Gate path, with the path ending at the Pennine Way at SK 08980 93327. The path was thought to be a Roman road linking Melandra Castle near Glossop to the Roman fort at Brough. This story originated from the fact that parts of it are paved. However, recent analysis indicates that this may not have been the case, as the path is very narrow in places and so would have posed danger to soldiers marching several abreast

Legend has it that its name originates from a doctor who was under the influence of the Devil. To gain his freedom, he was challenged to a horseback race. However, the Devil used his powers to win the race. Nonetheless, the doctor also learned from this that if he stayed on the far bank of the stream, the Devil had no power over him. If the footpath was in the condition then that it is now, one would have sympathy for anyone trying to take a horse up it. 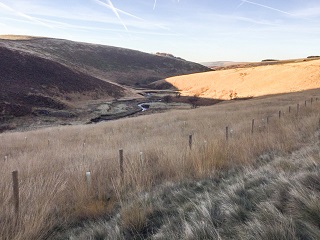 The old bridge across Shelf Brook (grid ref SK 07470 94087) was erected in 1969 and was dedicated to Edwin Ambler. Since then, the bridge had slowly deteriorated, until it reached a point where it had to be dismantled by Peak Park Rangers. Walkers have since had to brave the perils of crossing the Brook the hard way. However, a recent rumour suggested that a new bridge had finally been installed by Peak Park Rangers, in association with Derbyshire County Council. And lo and behold, arriving at the site, there it was - a colossus of a bridge if ever there was one. Built to accommodate a Roman legion on the march, or the Devil on horseback (unfortunately the path above the bridge is more suited to a gazelle). Take a look for yourselves.

Next: The Peak Forest Tramway