The Battle to Re-open the Path behind the Sea Wall 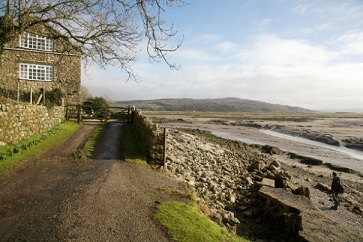 Until 1994, walkers enjoyed an outstanding view across Morecombe Bay as they traversed the 30 metres of track north of the sea wall in front of Brown’s Houses near Jenny Brown’s Point from Lindeth Road’s end at Silverdale to join Footpath 14. In that year, the path was deliberately obstructed, remaining so since. Walkers now have to negotiate the rocky foreshore, washed by high tides and dangerous in storms; difficult for all but the most agile and impassable for most walkers of advanced years.

Our local inspector has repeatedly sought re-opening of the path by Lancashire County Council. Unfortunately, the Definitive Map shows the path passing through the sea wall onto the beach, clearly an error. I met County Council Officers onsite, where we agreed that the Society apply for a Definitive Map Modification Order (DMMO) to reinstate the path along its original line. The Council agreed to apply to have the route through the sea wall deleted from the map.

The application was duly drafted, supported by evidence from walkers using the path for 20+ years, and was put before the Rights of Way Committee in April 2013, with a report by the PROW manager providing exhaustive, detailed evidence of the route of the claimed path behind the sea wall. A majority of the Committee’s Councillors refused to accept his recommendation for an order to amend the Definitive Map, a perverse decision. One councillor said: “I always believe common sense should prevail. You can stick as many old maps in front of me as you want and I think your report is very full but is it reasonable to walk recreationally on people’s private property in this day and age?”

An appeal to the Planning Inspectorate against this refusal, prepared by Peter Rothwell, was successful and the Council was instructed to make the Order applied for. The inspector stated that it did not appear that members against the application gave consideration to the statutory tests necessary under schedule 14 of the 1981 Act. In his view, a body of evidence supported the appellant’s claim that the route at issue was a long-established public right of way on foot.

In July 2013, a change in political control of the Council caused a new committee to meet to reconsider the matter. Reason and good sense prevailed. The committee accepted the Officer’s report nem con. The DMMO was duly made on 4th December 2013. Unsurprisingly, the owners of the properties next to the path objected, so the Council could not confirm the order, referring the matter to the Planning Inspectorate to set up a public inquiry. Unfortunately, there is no time limit for this referral to take place.

In despair, I recently used the Council’s complaints procedure to raise the issue, accusing the Council of inordinate delay. Within 24 hours, I received an assurance that the matter would be progressed within the near future. Since then, the process of interviewing witnesses has started.

We now await an Inquiry date, followed by the exchange of documents by the Council and those opposing the Order to reveal the basis of their case. This ensures focus on the matters in dispute. Unlike the case of the Cloud to Bridestones path, the Society will not have to pay legal costs. The case for the order will be presented by the County Council. A key witness will be one of our inspectors from West Houghten who used the path on many occasions whilst working as a school teacher taking groups of school children to see the furnace at the east end of the path.

Next: Let's meet our affiliates