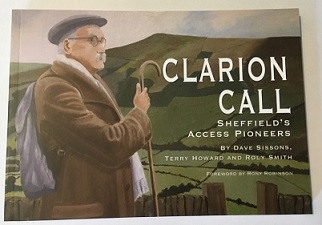 The recent publication of ‘Clarion Call’ by Dave Sissons, Terry Howard and Roly Smith is a very timely and appropriate reminder of how hard-fought access to the moorlands around Sheffield has been. The book tells the story of Sheffield’s access pioneers and focuses chiefly on the early history of the Sheffield Clarion Ramblers (SCR), founded in 1900 by G.H.B. Ward and led by him until his death in 1957. In doing so it draws on information contained in the small but highly detailed SCR handbooks which will be familiar to many of our members. The book also contains a wealth of photographs, many published for the first time, which provide a fascinating insight into the activities of the Clarion Ramblers.

This article is not a review of the book, although I do highly recommend it. My aim is to praise the efforts and writing of its three authors. Roly Smith should need no introduction; he has authored over 80 books on walking and the countryside and contributed an article titled ‘Wildness and Wet’ to Signpost 52. The other two authors will hopefully forgive me if I say that they have slightly lower writing profiles, however their contributions to the book show a deep understanding of the subject.

Dave Sissons is the book’s main author and is described by Roly Smith as an expert on the life and work of Ward. Dave is a PNFS member and a Footpath Inspector for 7 parishes in the Peak District. He had a long history of involvement with the Sheffield Campaign for Access to Moorland (SCAM) which dates back to 1990. It is no coincidence that he began an MA dissertation on GHB Ward in the same year. The majority of the book is written by Dave and demonstrates not only his in-depth knowledge of the Clarion Ramblers and GHB Ward, but also his passion for the moorlands that they explored. He has also identified the locations of many of the archive photographs that feature prominently in the book.

Terry Howard contributes the final two pieces to Clarion Call, ‘The Spirit of Kinder’ and ‘The Legacy of Bert Ward’. Terry’s involvement with SCAM predates Dave’s; he was a founding member in 1982 and subsequently became its Access Secretary. His passion for moorland walking originated from his earlier membership of the Woodcraft Folk, the co-operative youth organisation which promoted the benefits of the outdoors and being close to nature. Writing about why access to moorland is so important, he has said in the past that it enables us to enjoy our cultural heritage and wildlife as well as providing an opportunity for quiet contemplation and reflection.

All three authors have written passionately about an important part of the campaign to widen access to our wild spaces. They, and the subjects of this book, played a significant role in bringing about the access changes that are enshrined in the CROW Act (2000). Open access to large parts of the countryside was a long time coming and was hard won. We must never forget the people who campaigned for the law to be changed. This book is a fitting tribute to a small band of them

Next: The Society reaches 120 Years of Age