A Poem for the 120th Anniversary Celebrations 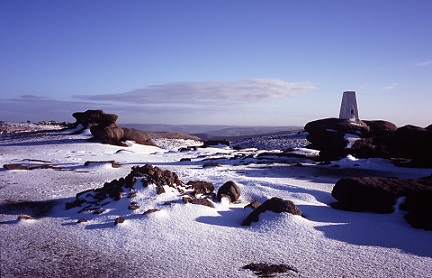 When I was researching this poem, I was very daunted by the challenge of writing about Kinder because I was all too aware that I was following in the footsteps of the great Peter Riley, a poet I admire so much. His pamphlet 'The Ascent of Kinder Scout' is a fine achievement.

As I thought about what I might write, I was interested to learn that 'trespass' is one of those words in English which doesn't really have an exact synonym. None of the synonyms the dictionary suggests are quite right because words like 'intrude' or 'encroach' don't capture the sense of movement, or the sense of freedom and reclamation. I realised that thinking of the Kinder Trespass had changed my understanding of the word 'trespass' itself, the things I associate with trespassing. I decided to write something inspired by a day I had walking on Kinder in January 2016 in deep snow when I wondered if I belonged in the landscape. The layout of the poem on the page is supposed to reflect a kind of breathlessness. I hope you like it.

We come from Hayfield         breathless in a spindrift of silence.
January, snow’s sudden trespass on the hill

snow waking the air with pins-and-needles,
puffing out a greeting as snow meets sky –

two walkers on a ridge, dressed in the same
pale overcoats. I mean         snow swarming

us trespassing through snow, our single route
how trespass knows no synonym

us clawing a way out, us standing
by the fence line drinking ginger tea         that pause

before we turn back for the town, the car
to trespass         trespass through our own lives again.

Next: My Favourite Café – RiversMEET