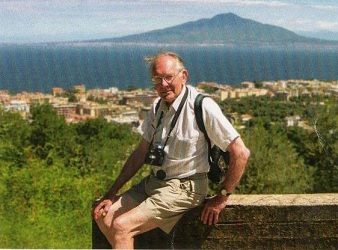 Derek was Chairman during a particularly challenging period in the Society’s history of declining membership numbers and influence, not helped by some internal discord. His tenacity helped us survive as an independent entity, as discussions were in train to merge the Society and its assets into the then Ramblers Association. Derek used Signpost, which he lovingly edited, to skilfully leverage the threat to the Society’s future with supporting purple prose, at which he excelled, persuading new blood into the Society’s management - I should know as I was one of them!!

There was a consistent thread to Derek’s activities for the good of the public—he was passionate and committed and prepared to step forward and take office, whether it was Cheadle Civic Society or the Karabiner mountain club or Environment Secretary for PNFS on top of his other duties.

At his funeral service where we were represented by Peter Burns, David Morton, Keith Wykes and myself, we heard of Derek’s awesome walking achievements from Jim Gregson, himself a Karabiner extraordinaire and longstanding friend of Derek: Derek in one walking session scaled all the Scottish 4000 footers; and completed the Tancat challenge, a 120 mile “walk” with 20,000 ft of ascent between England’s 2 highest pubs (Tan Hill & The Cat and Fiddle), in would you believe 64 hrs. (lesser mortals, and I’m one, took 5 days!!). But Derek didn’t stop there... he walked on to England’s third highest pub in Flash!! Then at the age of 80 he walked the Hadrian’s Wall route, coast to coast.

Derek as a person was kind, modest and positive with an impish sense of humour, passionate about protecting the environment and preserving our heritage, and a real pleasure to work with. Our Chairman, David Hurrell, has already written to Pat and family to express the heartfelt sympathies of all in the Society and they are echoed herewith. 4 We mourn the passing of Derek Seddon - truly a Man for all Seasons who would literally and figuratively always go the extra mile.