The Other Pennine Trail 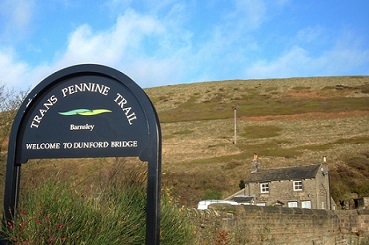 The Trans-Pennine Trail and the Pennine Way are designated via the word ‘Pennine’ as operating in the same region of England. However, they are very different in nature.

Some may consider the Trans-Pennine Trail a ‘soft’ option in comparison to its namesake. Yet in terms of length and points of interest along the way, it is every bit a rival. From Southport in the West to Hornsea in the East is 215 miles (346 km) according to the official Trans-Pennine Trail website http://www.transpenninetrail.org.uk/. However, adding in all of the Trail’s path network increases its total length to 370 miles (595 km).

The Trail is relatively ‘young’ as a complete entity, yet came together quickly once work started. Between 1999 and 2004, with £60m of expenditure, much of it from a grant provided by the Millennium Commission, the entire trail was completed.

The walking is certainly across easier terrain than the Pennine Way, with access points directly in towns and cities, and much of it using canals, riversides, disused railway lines and urban cycle paths. However, around 70% of it is free of motorised traffic, and it boasts some dramatic scenery along its way, both natural and man-made. The Trail reaches its highest point at Windle Edge (435m / 1427ft) in the Peak District National Park.

Towns and cities that are on the route include Southport, Liverpool, Manchester, Kirklees, Barnsley, Leeds, Sheffield, Chesterfield, Rotherham, Doncaster, Hull and Hornsea.

The website has large amounts of information, including maps, guides and leaflets, a special section for young people and information on reaching the Trail. Alternatively, the Trail’s office can be contacted: telephone number is 01226 772 574, or postal address is Trans-Pennine Trail Office, PO Box 597, Barnsley, S70 9EW.