In October 2015, a new land owner closed a well-used track from the Bridgewater canal to Hall House Lane in Leigh, Wigan. Unfortunately, this route was not recorded on the Definitive Map, so the Society and the Council had no powers available to remove the obstruction. The Society was asked to make a claim for a Definitive Map Modification Order to add the path to the map, on grounds that it had been used as a public right of way (PRoW) for more than the 20 years required by section 31 of the Highways Act 1980. Evidence forms were collected, testifying to the path’s use by generations of Leigh residents, some dating back more than 50 years. The route is also shown on OS Maps back to 1849. 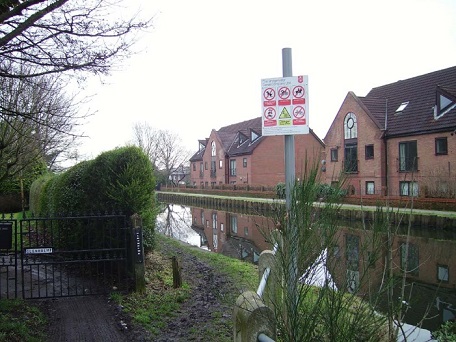 In early 2016, the PRoW officer for Wigan refused to accept the application, as it was, “considered to be for a cul de sac order terminating on private land over which there was no public access.” This refers to the canal bank on the opposite side of the canal to the towpath, where there is a clear path linking Leigh Marina to a canal bridge to Leigh Town Centre. Peel Holdings, who run the Bridgewater Canal, had confirmed to the Council that all users were directed to use the towpath side of the canal. The canal bank was considered narrow and dangerous and not appropriate for public use.

While most public footpaths end at a road or another public footpath, this is not legally required. Providing one end of the route leaves a public right of way, as does our claimed path, the other end may be a place of ‘public resort to which the public has access’. This could for example be a cliff top or summit of a hill. The Society was asked to obtain confirmation from Peel Holdings that they were happy for the public to use the northern bank of the canal for access purposes. Despite repeated telephone calls and letters this was not forthcoming, even though all our witness statements testify that the persons concerned had used the canal bank to travel to and from the claimed path.

The Society then sent the Council photos showing the path furniture along the north bank. This included a notice that dogs must not foul the ground which, assuming it was not solely addressed to the dogs themselves, implies a permission to bring dogs onto the path. Similarly, a notice prohibiting certain activities along the canal bank acknowledges that the public is expected to walk there. Use of the canal bank is not ‘as of right’ but ‘by right’, as it is not unlawful to be there. It cannot be claimed as a PRoW but there is no reason in law or fact why we cannot claim the path leading up to the canal bank as a PRoW.

In response, the Council retreated; perhaps it was the first time they had actually looked at the canal path on the ground and realised that it was very well used and that the arguments being made by Peel Holdings were a farrago of nonsense.

The Society was then informed that, “the PROW officer will now carry out an assessment in line with the Council’s guidelines to determine the Application’s priority”. We have since heard that the application has been prioritised as no 16 on a list of 20, where the Council aims to determine two a year. So it will be at least 8 years before the application is determined. I consider this unreasonable and an affront to Leigh residents, who continue to be deprived of a useful pleasant path.

In view of the delay, the Society has applied to the Secretary of State for a direction that a decision happens far more quickly. At present such an application is free and is decided by a Planning Inspector. Soon, this simple, free procedure will be replaced by a right of appeal to the Magistrates’ Court, with a hefty fee and probably a decision by a body of persons whose common characteristic is likely to be their complete ignorance of rights of way law.

Next: A brand new footpath for Bradfield