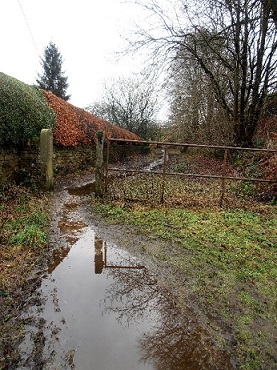 We featured the Peak Forest Tramway in Signpost number 53 last year. Tony Brackenbury, who is Footpath Inspector in this area continues to fight for improvements to the footpaths. For over ten years, Tony has chased Derbyshire County Council (DCC) to fix Tramway flooding issues between Whitehough and Charlie Lane (Chapel-en-le-Frith footpaths 124 and 172). Recently, a new DCC Officer, Thom Howe, was appointed and he has made progress in addressing the issues.

Tony joined with a local colleague (Rob Thompson, who has also been involved in many complaints relating to flooding from the Highway), to co-ordinate the actions of Thom and other DCC representatives involved.

The happy result is that work has begun to improve the state of the ditches and culverts on the A6 Chapel to Whaley Bridge by-pass. Despite waiting so long, Tony feels that a result is close, and it will prove that the Highways Dept are responsible for the water running from the by-pass to the Blackbrook River, rather than the riparian landowners.