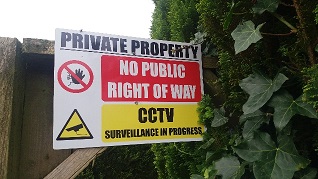 On the PNFS October longer walk, we were confronted with this sign, one of two either side of a property called The Heights, on the well signed Rotary Way near Harwood. The statement ‘No Right of Way’ is simply untrue and deliberately there to deter walkers. We ignored the sign. Jim Foster, our PNFS Inspector for the area, has now picked up the baton (or maybe cudgel?).

Jim says: “The footpath in question is BN-BRN 63 and I know it very well having had to report faults at The Heights regularly during my time as an inspector. The main problem seems to be that the definitive line of the footpath passes through the back yards of the dwellings at The Heights, which in itself is discouraging to walkers. The current position is that Bolton Council have served notice on the one particular householder responsible for them, demanding their removal. This was done by recorded delivery, confirming to the council that the removal notice has been received. If no action is taken the council will remove the signs and bill the householder for the cost. The householder has apparently been using delaying tactics by contacting councillors and heads of departments at the council and the matter has now reached director level, where support has been given for the removal of the signs.”

Next: Out and About with Digital Maps