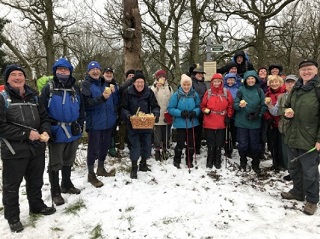 You may recall that David Bratt related a happy day spent with one of our affiliates, the Eccles Rambling and Social Club (ERSC) in Signpost number 54. I continued PNFS’s close relationship with the Club on Saturday 9th December, the day dawning cold in Cheadle Hulme.

Mist obscured Mellor Moor as I drove along the A6 to the assembly point above Taxal Church on Long Hill for a 10.30 start. The layby was covered with ice and snow, but was crowded with ERSC cars. To my delight, we were all issued with complimentary Eccles Cakes fresh from the bakery for our journey.

There were nineteen of us in the party which ascended the icy lane opposite. It took us past the site of Shallcross Hall, then the restored former railway incline, which rises from Horwich End and finally the stump of an old mediaeval cross at the junction of Elnor Lane with the Old Road to Buxton. We stopped there and wondered why someone had stuck a recently moulded model of a Celtic cross on top. Then up the hill past Elnor Lane farm and left along Long Lane, where we inched our way past some very deep puddles – it is an Other Route with Public Access (ORPA).

Friendly chatter marked our passage. Combs Reservoir and then Eccles Pike briefly appeared through the mist and a two-coach train rattled past far below. Soon we reached the tarmac road which drops steeply to Spire Hollins Farm and the Beehive Inn at Combs, en route to Rye Flatt Farm and our destination, Allstone Lee Farm, below Combs Edge. Our objective was signpost 208, which points the way to White Hall on Long Hill, where the legendary Manchester climber Joe Brown was an instructor from 1960-64. He left his mark locally in “Joe Brown Numbers” - https://www.ukclimbing.com/forums/hilltalk/joe_brown%27s_numbers-667850

White Hall was the first local authority outdoor education centre starting in Feb. 1951, thanks largely to Jack Longland, Derbyshire’s then Director of Education and a regular on BBC Radio’s “Any Questions”, “Round Britain Quiz” and “My Word” for thirty years. Signpost 208, which was clearly a fingerpost, but designated a signpost in our records, had been paid for by ERSC in 1986 to commemorate their 40th anniversary. I went to inspect it this year and realised that 2016 had been their 70th. As its finger was getting rather tatty, I contacted their secretary Bob Pritchard and proposed that we have a nice, durable, green plate made. The post was bolted to a concrete stump and in good enough condition to re-use, so I was able to offer him a good deal. It was quickly agreed by the committee.

On arrival at the sign, speeches were made by chairman Tony Mortimer and David Bratt, sandwiches were eaten, champagne was dispensed and a toast drunk to the spirits of members past. Tony reminded us that his club had sponsored one of our signs every decade for seventy years. My hope is that we will all survive and they will sponsor another sign on their 75th anniversary in 2021. We walked back over scrunchy, white snow, past Meveril Farm and Tunstead Farm, then S424 above Cadster. More two-coach trains rattled by. On our return to the layby, there was a third generous dispensation of excellent Eccles Cakes.

It was my first time out walking with this affiliated group and I greatly enjoyed their friendliness and companionship, not to mention the champagne and Eccles Cakes!

Next: The Combined Benefits of Walking