This article is from Signpost 56, February 2017

Eleven or twelve years ago when I became Signpost Officer, nearly all of our signposts were concentrated in a central area comprising the Dark Peak, White Peak and West Pennine Moors, plus a few in Cheshire. We’ve made an effort to spread them further afield in order to gain some publicity for PNFS in areas where it was little known. We now have 60 outlying signs as follows: 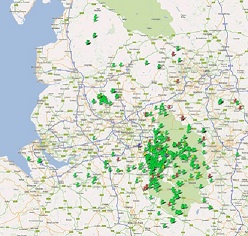 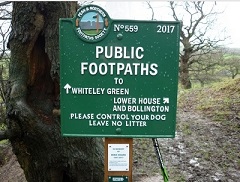 After discussion with Nabil Abbas of Sheffield Wildlife Trust (SWLT), I have ordered a new plate for S276 which will be re-instated at Blacka on an 8’ post together with a new, metal plaque in memory of William Blake, provided by the SWLT.

Deaths in the signpost team

Sadly Mike Hoare, who partnered Pete Ash in repainting our signs, died at the age of 70. He is greatly missed by us. He is commemorated by a plaque on S549 at Whiteley Hay Farm, Butley Town, Prestbury. Pete has vowed to continue their work.

Mike’s predecessor Brian Morrison died in early January at the age of 83 and will also be commemorated in due course.