In October 2014 we held an Inspectors’ Conference in Manchester and are holding another on Feb 24th 2018. My notes tell me that one of the things footpath inspectors were most unhappy about in 2014 was the way the Society recorded ‘faults’ that were reported to Taylor House. The problem was that the Faults Log was not easily available for anyone to inspect and there was a suspicion that much of the record was out of date or inaccurate.

People wanted a way to record faults online, so that inspectors could verify the record that was being kept. Inspectors also wanted to see the faults that had been reported by other inspectors.

Another issue discussed was - how does the Society know how active an inspector is? Under the old system, it was impossible to tell whether it was because an inspector was active but had not found any faults or that the inspector had become inactive.

The Faults Team also spent huge amounts of time entering data and trying to interpret inspectors’ reports that came in a variety of forms, sometimes without a clear location for the fault.

The solution to all these problems has been the introduction of the Footpaths Inspections Database designed by Roger Fielding a PNFS member. We are very grateful to Roger for all his hard work.

Now the work of inspectors is available for all inspectors and, potentially, all PNFS members to see. The database is an online, map-based record of footpath inspections showing all rights of way in each parish. It is easy to use and has an attractive format. Currently the following areas are covered - Derbyshire (including Derby City), Cheshire (East and West), Stockport, Barnsley, Trafford and most of Staffordshire. Other Highway Authorities will be added soon.

There are two major innovations in the new database. Firstly, inspectors can record their own inspections (though we can do this from Taylor House if that is preferred) and secondly, the database records the date of the inspection and the condition of the path (and not just faults). The path can be classified as clear (shown as green on the map), with a fault (yellow on the map) or impassable or with a dangerous fault (red on the map). It is also possible to view all the paths as a list. This example below shows Chapel-en-le-Frith, inspector Tony Brackenbury. 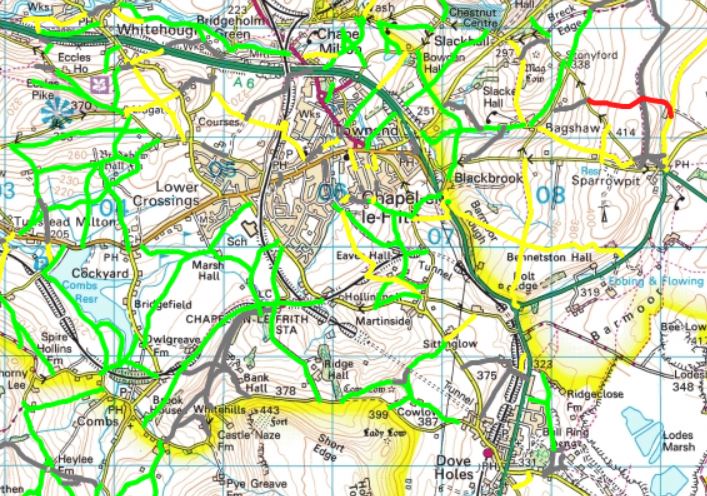 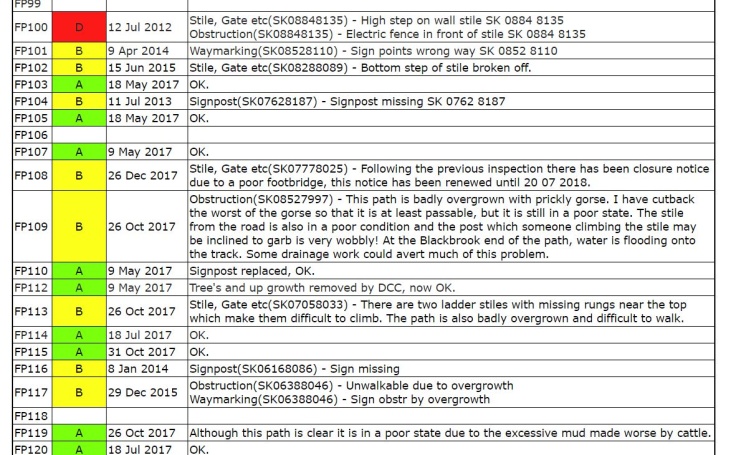 It is easy to mark the location of the fault by simply clicking on the map and this generates a grid reference automatically so there’s no longer a need for the chore of working out grid references. Where there is a fault, the inspector provides a description (and if possible a photo).

At the present time, it is necessary to make a separate fault report to the Highway Authority, but we hope eventually that it will be possible to send your entry on the database direct to the HA, making it a one step process. The database has the facility to record correspondence with the Highway Authority as an ‘event’. The database has only been available for a short time, so there are still many parishes where the records are incomplete or absent.

The success of the database will ultimately depend on whether inspectors are reasonably conscientious in entering the record of their footpath inspections in the database and then periodically updating the record. Inspectors can send their record to Taylor House and we will enter the record for them. Either way the more complete the record, the more useful it will be. For the ordinary member of PNFS who is not an inspector, you have the chance to see whether a path is clear (when last inspected) when you are planning a walk.

Next: A Tale About Crich Footpath 42