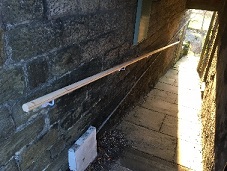 A couple of weeks ago I received a call at home from a member asking if there had been any progress on making good an unsafe stile that she had reported to the society some time ago. Somewhat to my embarrassment I realised that it was still on my ‘to check list’, but I promised to follow it up. The next day I checked the problem stile, which was certainly dangerous, as were two others! I also had a close shave on a slippery path between two houses on the same route.

I reported all four problems to Barnsley Metropolitan Borough Council (BMBC) that day, offering photographs. I was pleasantly surprised to receive a reply next morning asking for the photos. A few days later another email arrived telling me that the ranger had made the stiles safe and that the estate owner of the two houses had agreed to fit a handrail on one of the walls alongside the slippery path. Within less than a week all four problems had been resolved.