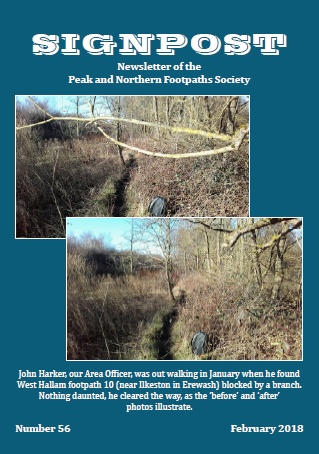 Winter is upon us, so it can’t be long before spring is just around the corner. But what of Autumn? In its usual mixture, there were good and bad days in about equal numbers. Some people much prefer Autumn to any other time of the year, with its wonderful colours and contrasting shades.

A Window on One of Our Affiliates; Denton Local History Society
by Allan Arrowsmith

The society was formed in June 1978, so we are looking forward to our 40th birthday next year. In 1978, the M67 motorway was being constructed, so there was much to do, in taking photographs and recording buildings which were to be demolished.

It gives me no pleasure at all to make the very first Really Rustic Award to the work carried out on Holmfirth Footpath 8.

We featured the Peak Forest Tramway in Signpost number 53 last year. Tony Brackenbury, who is Footpath Inspector in this area continues to fight for improvements to the footpaths.

'The Heights'
by David Bratt and Jim Foster

On the PNFS October longer walk, we were confronted with this sign, one of two either side of a property called The Heights, on the well signed Rotary Way near Harwood.

Out and About with Digital Maps
by Mel Bale

Like many PNFS members my love of maps goes back to my school days. I can remember a geography lesson where a group of us were handed the Ordnance Survey One-Inch Map of Manchester.

Talking about PNFS
by Shirley Addy

I have given over a hundred talks on several subjects to various local groups such as Probus, local history, U3A and Rotary.

You may recall that David Bratt related a happy day spent with one of our affiliates, the Eccles Rambling and Social Club (ERSC) in Signpost number 54.

The Combined Benefits of Walking
by Ushapa Fortescue

Although I’ve always been a keen walker, I have only recently become a member of PNFS. I decided to join after attending a long walk from the programme and going on many walks with my mum, a footpath inspector, often accompanied by David Hurrell, who provides local knowledge and map reading.

Shirebrook is a former mining town in the Bolsover District of Derbyshire, on the border with Nottinghamshire. Footpath 33 was added to the Definitive Map & Statement (DM&S) by an unopposed confirmed Order in August 2013.

A Tale about Crich Footpath 42
by Ken Brockway

While trawling the web, Ken found an interesting article about the creation of Crich footpath 42, from Crich Carr to Whatstandwell station.

Do you go walking in Derby? Almost certainly not, but there are many public rights of way within the Derby City area which are well used by local people to get to shops, work, bus stops and other facilities.

And Finally...
by Mel Bale

A couple of weeks ago I received a call at home from a member asking if there had been any progress on making good an unsafe stile that she had reported to the society some time ago.