Funding for New Footbridge Handed Over 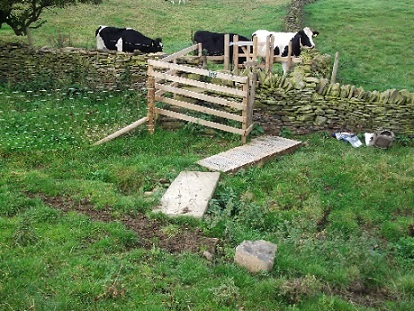 Last October a small ceremony was held at a new footbridge and boardwalk on Gunthorpe & Ingbirchworth FP2, at which our Chairman handed over a cheque for £751 to Barnsley Council to fund the cost of the work.

The need for a bridge was first suggested by John Harker in early 2014. The footpath crossed Tanyard Brook which had been choked with stones put down as stepping stones. This led to an area of boggy ground for a few metres each side of the brook, which was made worse by livestock gathering there to drink. Just to the north of the stream was a stone wall with a stile in poor condition, which added to the difficul- ties for walkers using the path.

The Society made an offer of funding and Sarah Ford, the Council’s Principal PROW Officer, started negotiations with the landowners. The original design was for a timber bridge with handrails but the landowners were not happy and thought the rails would be used as “rubbing posts” by the livestock, so helping the ground to be churned up again. Eventually, a stone clapper bridge with an adjoining boardwalk was agreed upon.

Barnsley Council’s staff dug out and cleared the stream bed, built abutments and manoeuvred the stone slab into position, as well as con- structing the boardwalk adjacent to the bridge. The Council replaced the previous stile with stone steps to deal with the height difference, a gap in the wall and a wicket gate. The land to the north of the wall is in Kirklees Council’s area and they had previously improved the waymarking of Denby footpaths 72 / 30, mak- ing the line of the path clearer.

Following the ceremony, an article about the bridge appeared in the Barnsley Chronicle giving some useful publicity to the Society. Walkers can now enjoy a more pleasing walk between Ingbirchworth and Upper Denby.

Next: The Te Deum Stone