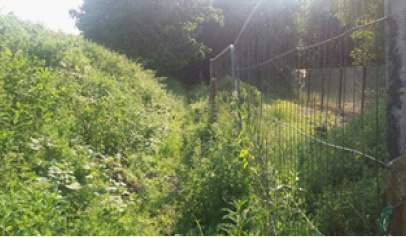 Jenny & David attended a public inquiry into the above in December 2017. The Order was made by Warrington Borough Council in July 2017, to modify the definitive statement & map for the area by adding the footpath. It could not be confirmed by the Council due to receipt of objections and was referred via the Secretary of State to the Planning inspectorate to be determined at a public inquiry.

The purpose of the inquiry is to establish if the requirements for presumed statutory dedication, as per s31 Highways Act 1980, are met. Thus proving, on a balance of probabilities, that the public have used the claimed route as of right (i.e. without secrecy, permission or force) and without interruption for a full 20 years.

Where these requirements are not met, the inquiry may examine the matter from a common law perspective and apply a different test. For example, whether, during any relevant period, there was express or implied dedication by the owner(s) of the land in question (having the capacity to dedicate a public right of way) and whether there is evidence of acceptance of the claimed right by the public.

The full length of the claimed footpath had originally been included on the draft definitive map in the early 1950’s.

The footpath leads to and from Glazebrook Station, passing over land owned by a Railway Company at the time.

The British Transport Commission objected to its inclusion on the map on the basis that s57 of the British Transport Commission Act 1947 prohibited the acquisition of any rights of way over land owned by the Railway. It was decided to remove the section across railway - owned land at a subsequent public hearing in March 1957. This was despite the protestations from the local parish council, supported by historical map evidence, as to its long use as a footpath. This decision resulted in the footpath being recorded on the definitive map as ending in a cul-de-sac. In December 1986 the land owned by the Railway was sold to a private individual and continues to be in private ownership. This change to private ownership made the land capable of dedication and the public can acquire rights of way over it. This date played a material part in the Inspector’s assessment of user evidence at the inquiry. Any user evidence up to the sale in 1986, although useful historical evidence, could not be considered for the purposes of meeting the statutory test.

The evidence given by supporters and objectors proved insufficient to show, on the balance of probability, that a public footpath subsists over the Order route, under the terms of Section 31 of the 1980 Act.

However, the evidence was sufficient, on a balance of probability, to show that, at common law, dedication of a public right of way along the Order route is implied, primarily by the inaction of the landowner between late 1986 and mid-2006, and that, despite the limited number of people providing evidence of their use, this is sufficient to demonstrate acceptance of the way by the public.

David Bratt has since officially confirmed with the Authority that the path is open, but that what it needs now is some footfall – which is where all of you can play a part.

Next: An enthusiastic volunteer passes on the Baton – June Mabon