An enthusiastic volunteer passes on the Baton – June Mabon 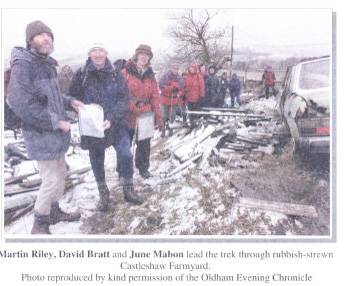 I knew about June Mabon’s work on Inspectors’ Badges, but I also suspected that she had been active in various other roles over the years. I asked her to write up her history with the Society, which she duly did – and I now understand the extent of her work and how important she has been to the Society.

After reading June’s account, David Hurrell commented: “I had gathered that June had a number of posts in PNFS, but I had no idea she had been so involved over such a long period of time. I will mention June’s retirement at the AGM, and offer thanks for all the work she has done.” Now read on as June recounts her involvement in the Society.

Following the death of General Secretary Derek Taylor in February 2000, I took over that role at the invitation of President Leslie Meadowcroft and the other Trustees. By August 2000, the Trustees had concluded that Derek Taylor’s shoes were too big for one person to fill and the General Secretary role was dismantled, with individual tasks being re-allocated amongst Trustees and others. I became Minutes Secretary and, sensing the need to introduce....?

Somehow, from my work producing FP Inspector badges, came the task of managing the production of the Annual Report and Accounts. PNFS had always had an enviable track record of promoting and preserving rights of way and the Annual Report was a way of bringing together the work of the team at Taylor House and the much larger team out in the field, so some judicious juggling was needed to incorporate a cross section of reports while still giving an appropriately-sized report.

The Report task was later devolved in 2004 as part of the ongoing development of the Society. By now the Society’s membership was automation to PNFS, was part of a small working nudging four figures and the Trustees felt it group which developed the PNFS website and the email address and faults databases. A big stride forward for PNFS at that time.

The sudden death in 2002 of President Leslie Meadowcroft, PNFS’s driving force at the time, brought more re-organisations and I relinquished the Minutes Secretary role, moving closer to the Footpath Inspector (FP) work of the Society. Many long-serving FP Inspectors were retiring and it was decided to help new and established FP Inspectors by giving them a Society identity. An ID badge was issued as a sort of “badge of office”. In creating the clip-on laminated ID badge with the photograph of the FP Inspector, I was greatly helped by my husband Ian. There was also some “tidying up” of Inspector areas, as early retirees from day jobs started joining the Inspection team with their own transport and a familiarity with managing the interface with figures in authority such as local highway councils.

??? ...time we promoted the work of the Society in the media. I was happy to organise events where we were joined by local dignitaries which resulted in photographs and column inches of publicity in the local press. The Society’s black and white publicity / recruitment leaflet was next in line for an update, and, together with four others, in December 2005, we created a full colour version with a picture of Monsal Head on the front fold.

I have enjoyed all my various tasks at PNFS. I am a proud supporter of the aims of the Society, love to see the PNFS signposts pointing the way in so many locations (our “silent ambassadors”, as one Chairman called them) and have enjoyed serving the Society for 18 years through the terms of seven Chairmen. Time now to let my successors carry the baton of ID badge production for the continuing success of our great Society. I will sit back and enjoy simply being a PNFS member.

Next: Walking the Dales Way – a new edition of an old favourite