Signpost Report, January to May 2018 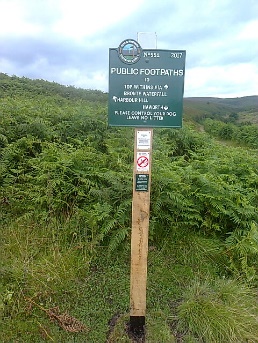 No new signposts have been installed, but three have been stolen, leaving a total 487.

Two more have been badly damaged and several others have required attention, so the team has been fairly busy, even in February and March when the weather was wintry.

Peter Ash began his repainting programme with S056 on the A57 Snake Pass, then helped John Hodgson to reinstate 086 at the south end of Mortimer Road near Moscar House, after it had been knocked down during road works. He also repainted 152 at the former Moorside Hotel and 246 at Kishfield Bridge, Kettleshulme.

John and Ted reinstated 106 at Alport Bridge and set it back a few yards from the A57 in order to reduce damage from salt spray.

276 was reinstated by Sheffield and Rotherham Wildlife Trust volunteers at Blacka near Totley, with a re-designed plate, a new memorial plaque and a donation of £100.

New Memorial Plaques were fixed to 550 (Marple G.C.) and 539 (Flash) for Altrincham RA and Trafford Walkers respectively. A stolen MP was replaced on 456 at Eyam Moor and a stolen Join Us Plaque on 103 at Sparbent.

I recently revisited Win Hill with Mike Atkinson of Halcyon Ramblers and I was then able to complete the drawing for Toposcope 3, which will be in memory of Geoff Errington, a Taylor House volunteer who travelled up every Monday from Belper.

On the debit side, 346 at Whittle was confirmed stolen, but the owner’s tale blaming errant youths was disconfirmed by others.

In April, following reports of damage to 002 and 019 near Kinder Reservoir dam, I visited the scene and found one plate from 002 smashed, two plates from 019 in smithereens and the post uprooted and thrown over the nearby dry-stone wall. I temporarily re-fixed 019 in its hole and notified Tom Harman of the NT of damage to the NT’s new gate and Bridleway Signs. I have had no reply from him.

May brought more bad news. 529 and 535 respectively on and south of Longridge Fell had both been stolen lock, stock and barrel, even though 529 is only accessible to vehicles via a forest road with a locked barrier. I reported the theft to Lancashire Police’s CSO at Longridge and contacted the Clitheroe Advertiser.

Both plaques on 251 at Gradbach Mill were stolen. 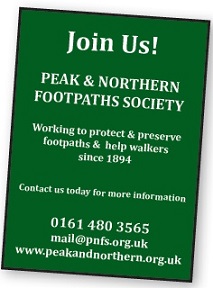 After contacting Richard Felton and Keith Feltham (Inspector for Ashover) I expect to place up to ten new signposts around Ashover.

552 now carries a memorial plaque to Roy Cannon (1921-2017) thanks to a generous donation from S.Yorkshire and N.E.Derbyshire Area Ramblers.

I have landowners’ consent for two in Quarnford and am hopeful of two or three more in both Blacko, Pendle and Holymoorside.

Finally, we have redesigned the Join Us Plaque, so that it tells people what PNFS do.