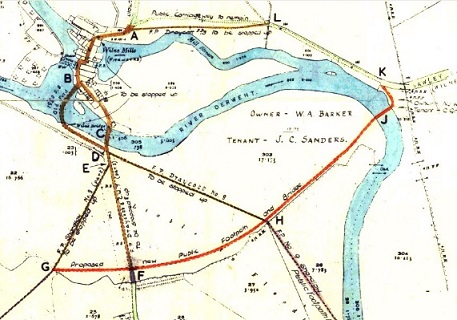 Back in 2015 when I did the first parish inspection I missed a small gap on the map at the end of Shardlow and Great Wilne footpath 9. There was no issue on the ground; a bridge crossed a drain where a stile at the parish boundary allowed unimpeded access to Shardlow. Only later after a careful inspection of the Derbyshire online map did my investigations begin.

In June of 1950 Claud Harold Wallis of Derby Road Draycott was completing the parish return for the 1949 National Parks and Access to the Countryside Act. He was clearly aware of a local issue because he adds a comment “Foot bridge not in place at time of survey, in dispute through Mill Yard.” He then recorded “FP8...Starting Point Wilne Toll Bridge...Finishing Point Derwent Mouth Lock”.

A recent history of the area “Neddytown” by Richard Guise has this to say about the bridge: “Wilne Bridge formed part of the regular journey to work for many of the workers at Draycott, paying their penny toll...After the collapse (in 1936) a pedestrian-only bridge was built and opened in 1937. This later structure, now (2014) a rusty hulk that still spans the river was closed... in 1950 (despite vehement protests from both sides of the river...).

For eleven years the network of paths that converged on the derelict bridge remained out of use enforcing a twelve mile journey by road for those who needed to make the journey on foot.

Finally in May 1961 there was movement when a notice appeared in the London Gazette proposing that the old footpaths be stopped up and a path created linking with a ‘new footbridge to be constructed’ (250 metres downstream).ur horses, we are not there yet...In a letter of July 1961 “The Magistrate asked the County Council to give favourable consideration to the making of the new highway into a bridleway...it will be necessary to construct ramp approaches to the bridge instead of 12 steps...which is the present design.” The Magistrate didn’t get his wish and the bridge still stands linked to a footpath network...but.

Derbyshire County Council misinterpreted the order back in 1961 and removed the whole of D&CW FP8 from the Definitive Map, including the ten metres that runs from the new footpath over the drain bridge to a stile on the boundary with Shardlow parish, as you can see from the map.

My list of paths for inspection in 2015 jumped from FP7 to 9 but I’m delighted to report that 8 has now reappeared on the map; see the latest version online. Ten metres may appear insignificant but as Neil Armstrong said...... ‘That’s one small step for man, one giant leap for mankind.”