John Harker’s, James Petts’, and Oliver Taylor’s article in Signpost 57 reminded me of a path (Leeds 223) that went underneath a factory in the Stanningley area of Leeds. I only walked it once around 1990. I recall stumbling through an unlit, damp subway – and being very relieved when I got to the other end. I now realise it was only about 30m long but it seemed much longer at the time.

Historic OS maps and research (https://alsilson.files.wordpress.com/2018/05/some-stanningley-industries.pdf) by local historian Anthony Silson reveal that the factory was built in the early to mid-19th century. The path was adjacent to the north east factory wall and open to the elements. Around 1900 the factory was extended to the north east – only then was the path covered and the subway created. The path and factory were shown (SE 223 346) on OS Explorer sheet 288 published in 1999. The factory was demolished around 2000 and the path diverted in 2003 to accommodate new housing. Although new editions of sheet 288 were published in 2004, 2005 and 2007, it was 2011 before the new line finally appeared on the OS. 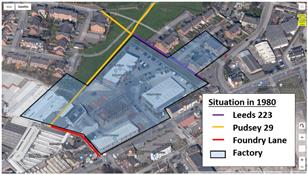 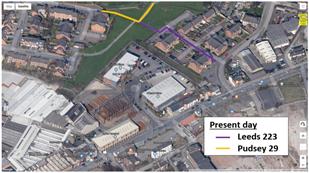 Was building over the path controversial? Did the factory owner try to have it closed or diverted? What happened during 1914-18 and 1939-45 when the factory was contributing to the war effort – was the path closed as a security risk? Would the Taylor House files reveal anything? The files had nothing pre-1980s, but revealed another path – Pudsey 29 – had run along the north west side of the factory and connected Leeds 223 with a street called Foundry Lane. Pudsey 29 had itself been partly in a subway formed by factory extensions.

The part of Pudsey 29 alongside the factory and part of Foundry Lane were closed (to allow further factory expansion) following two Public Inquiries in the early 1980s at which PNFS was an objector. Only the Inspectors’ reports are in the files – no other Inquiry documents are present – but it is clear that PNFS’s Don Lee (and one other objector) battled hard to protect walkers’ interests. Unfortunately all objections were rejected and closure followed. Pudsey 29 was little used and Leeds 223 was considered a suitable alternative. The part of Foundry Lane that survived the 1980s has now also been closed.

The subway I knew about was not as unusual as I thought. There had once been another just around the corner. The Taylor House files revealed part of a forgotten history about the local footpath network and PNFS’s role in it. If the full Inquiry documents survive there might still be photographs of the Stygian paths which Stanningley people once used. All I can supply are modern Google images with former and present path lines superimposed. Going Underground in Leeds.