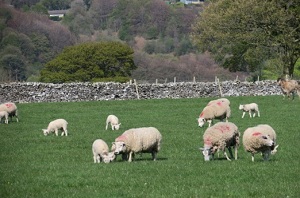 One of a number of things that Peak and Northern Footpaths Society does is to help to fund small bridges over river crossings where there were none. However, we have recently contributed £5,000 towards the repair of a damaged clapper stone bridge near Blackshaw Head, above Hebden Bridge on the Pennine Way. The Pennine Way was the first of many long distance walks and has gained particularly for being one of the longest walks in the country. The stone bridge over the river has particularly long slabs of stone, one of which became broken when a tree fell directly onto the bridge.

The two local Parish Councils of Blackshaw and Heptonstall have been particularly active in getting the bridge repaired, and the strong community spirit in the area has helped to drive the scheme of repair forward. A specialist stone repair contractor was engaged to repair the bridge, stitching the two halves of the broken sections together, leaving the bridge ooking like it was before the damage occurred. PNFS's contribution of £5,000 has helped towards the repair and kept the Pennine Way open to the north of Hebden Bridge.

On 13 April 2019 the Society held its AGM in Stockport. Not as many people attended as the trustees would wish for, but nevertheless it was a good meeting, and with a speaker from the Woodland Trust most people enjoyed the event.

We have decided that the Quaker Meeting House, close to Sheffield Cathedral, would be a suitable venue, which can be reached by the tram service, which runs every 12 minutes from the railway station.

For those of you who go on the PNFS walks you will know that we usually start and finish the walks at railway stations, except in a few instances when a short bus ride may take us a little further afield from the station. However there are indications that using public transport may get even more difficult. The largest operator of buses in north Manchester is about to pull out, leaving the running of routes to others. The mayor of Greater Manchester is not helping matters by insisting that buses should meet stricter emission standards to help with cutting down on pollution. This is more complicated than it sounds as some older vehicles cannot be modified.

Greater Manchester will need many more buses in a short period of time, which cannot be built and delivered. This will result in a much poorer service for those of us who try to use buses to help the environment. Buses are only responsible for 6% of emissions, so running more buses would help to get us to leave our cars at home.

Greater Manchester and the North of England have been promised more and newer trains for many years now. Where are they? We were promised electrification, but this has been severely cut back when electric trains would bring much cleaner air for all of us. We now have thirty year-old electric trains operating out of Liverpool, and some are to be fitted with diesel engines! When you read this a few new trains may have been introduced, but don’t get too excited.

Some better news is that Stockport is to have a new bus station with a walking link to the railway station - something of a climb I would have thought. Whether this will make much difference to those walking to Taylor House from the station I do not know. There is to be a garden built over the top which should help the environment of the town centre. Whether this will be built in the next five years is open to question, but links between different modes of transport is to be welcomed.

Peak and Northern Footpaths Society is a lover of the country side as well as a promoter of good accessible footpaths for as many people as possible, and clean air is all part of what we hope to experience whilst we enjoy the countryside.

As mentioned in previous Signposts, the Society is on the lookout for a new lady Trustee. So far there has been no person stepping forward to see if they may be suitable. There must be a person within the membership who could put their name forward for consideration.