Book Review: The Old Roads of Derbyshire by Stephen Bailey

I was delighted when I was asked to review Stephen Bailey's The Old Roads of Derbyshire. Although I live in the Ribble Valley, my husband and I usually spend a week walking in the Peak District each year, and I find old roads fascinating but I do not possess many books on the subject. Hence I could not wait to start reading it. 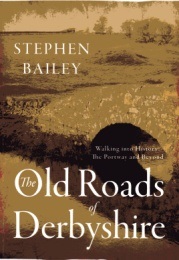 This book represents 20 years of research and extends the scope of the author's earlier book, The Derbyshire Portway: Pilgrimage to the Past. The first half traces the development of the road network from prehistoric tracks up to the twentieth century. As the author points out, many old roads survive as footpaths or bridleways. I love walking on holloways and green lanes, but generally archaeologists and historians tend to avoid the subject of roads and concentrate their excavations on burials or settlements.

In The Old Roads of Derbyshire Bailey presents the latest thinking, supported by references and a comprehensive bibliography. For example, there is growing recognition that the Romans built some of their roads upon earlier ones. Our early forebears were nomadic and itinerant trade was essential for the exchange of vital goods. As he describes roads through the ages, we meet their users including jaggers, pilgrims and tramps and how their travels were sometimes guided by stoops, bridges and inns. Although the routes are in Derbyshire, there is much historical information to other parts of England. The book is very well illustrated and many walkers will find their walks enhanced by an ability to read the landscape.

It is in the nineteenth century that we meet those who walked in the countryside for pleasure. The Romantic poets popularised this pastime, although it was in the 1900s that more working-class people had the leisure to cycle, walk or climb. One of the earliest walking clubs was the PNFS, of which the author is a member, and one of its signposts is illustrated.

The second part includes a detailed walk route of the 60-mile Derbyshire Portway, which runs from Sneinton, Nottingham to near Mam Tor. This existed before the arrival of the Romans and can be still be followed today. The route is divided into eight stages accompanied by diagrammatic maps. For each stage, Bailey gives a detailed historical overview with points of interest, followed by separate succinct route directions for walkers. In addition to the Portway, the author offers three historic routes for walkers.

It was a pleasure to read The Old Roads of Derbyshire. I can heartily recommend it to both walkers in Derbyshire and landscape historians everywhere. Members can buy a copy directly from the author, post free, by sending a cheque made out to S Bailey for £9.75 to 7 Hindersitch Lane, Whatstandwell, Matlock, DE4 5EF.

Next: A Gap Discovered