A Green Trail in Manchester 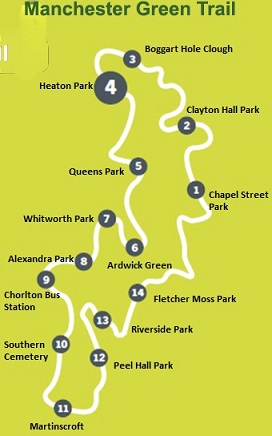 Manchester City Council, TfGM, City of Trees and The Ramblers set up a series of fourteen walks connecting many of the City’s parks, woodlands and open spaces. This was called the “Manchester Green Corridor” and is now being revised and relaunched during “Love Your Parks" week, 14-21 July (to celebrate 150 years of public parks in Manchester). The actual date for the relaunch has not been set yet. The aim of the Green Corridor is to create a high quality walking route across the City of Manchester via its Parks and open spaces that will:

1. increase usage of the parks, woodlands and open spaces which will make them livelier and as a consequence safer (less anti-social behaviour), sustainable and more inviting places for people to visit;

2. encourage healthier lifestyles and reduce car usage by promoting walking routes that are accessible to everyone by public transport.

The main reason for the revision is, since its launch in 2012 some of the routes have been crossed by the metro thereby requiring a re-route and what I found strange on checking route 4 (Heaton Park to Queens Park) was that although Heaton Park is Manchester’s main park both this route and the previous route stopped at the park gate and did not go into the park. I persuaded the committee to extend the routes to encompass the park and to do this in other parks as well. I and several other ramblers have been responsible for checking the routes and TfGM for producing maps.

Unfortunately there is not the funding for printing thousands of leaflets but pdf documents for each walk with a map of the route have been produced and posted on “the Manchester and Salford Ramblers’” website. Click here to view or download the files.

Next: Seen on the Moors