Seen on the Moors 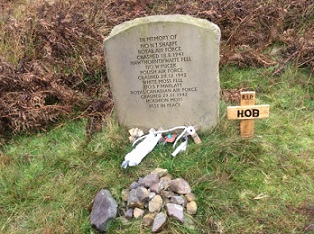 Seeing John Harker's photographs in issue 58 of Signpost (p14, Seen on the Moors) reminded me of a memorial that I saw adjacent to PNFS signpost 418 at Langden Castle in the Trough of Bowland.

In 2014, several memorials were erected in memory of the eleven pilots who were killed as their planes crashed in the Ribble Valley and Forest of Bowland during the World War II. This one remembers three of them, who were of the RAF, Polish Air Force, and Royal Canadian Air Force. A few small pieces of metal still remain of these warplanes.

Next: Blast from the Past