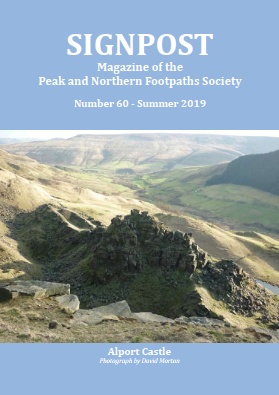 One of a number of things that Peak and Northern Footpaths Society does is to help to fund small bridges over river crossings where there were none.

I am delighted to present my second - and biggest so far! - edition of Signpost. Containing 24 pages, it is an extra bumper issue! Is this a record?

PNFS's much-loved, last-but-one president, Derek Seddon is commemorated on a new sign on the Rainow to Lamaload path...

The Hebble Hole bridge is a grade 2-listed historic stone clapper bridge which carries the Pennine Way across the stream in Colden Clough...

The first is of this section of footpath, on the outskirts of Sheffield on the Peak District NP boundary, taken last year.

I am the inspector for Alfreton and I recently reported this stile in the Amber Valley district of Derbyshire after walking FP71 on 29 March 2019.

I recall the previous editor asking for the post with the most signs, so I offer one.

We have installed six new signposts as follows...

Following the slight change in our constitution last year. We immediately started to look round for suitable footpath improvement schemes.

June is often the busiest month of the year for me as membership secretary as this is when the society’s membership year officially begins.

We are today familiar with free access to walk and often cycle along canal towpaths. British Waterways Board and now Canal and River Trust actively encourage this use but it wasn't too long ago that...

Watch the movie of a PNFS Walk ...
by Ken Smith

Book Review: The Old Roads of Derbyshire by Stephen Bailey
by Shirley Addy

I was delighted when I was asked to review Stephen Bailey's The Old Roads of Derbyshire.

A Gap Discovered
by Ken Brockway

A gap has been discovered where Derbyshire, Long Eaton footpath 59 meets Cleveland Avenue.

Book review: How to Lie with Maps by Mark Monmonier
by Andrew Harter

A book title like this seems apt in a world where terms such as fake news, post-truth, and alternative facts are commonly used.

Gift Your Gear
by Andrew Harter

If you have any unwanted - but still serviceable - outdoor clothing or equipment an excellent way to dispose of it is through the Gift Your Gear scheme.

I reported this overgrown footpath on the outskirts of Huddersfield. I also reported it to a contact I have in Huddersfield Ramblers.

Signposts in Ashover
by David Morton

S556 and 558 are two of twelve signposts which now stand in the parish of Ashover, North East Derbyshire, where previously we had none.

A Green Trail in Manchester
by Geoff Jones

Manchester City Council, TfGM, City of Trees and The Ramblers set up a series of fourteen walks connecting many of the City’s parks, woodlands and open spaces.

Seen on the Moors
by Shirley Addy

Seeing John Harker's photographs in issue 58 of Signpost (p14, Seen on the Moors) reminded me of a memorial that I saw adjacent to PNFS signpost 418 at Langden Castle in the Trough of Bowland.

Blast from the Past
by Graham Smith

Whilst sorting out for disposal dozens of local history, transport, canals and stamp albums from my father-in-law we came across this photograph...

A good example of how a cross-field footpath on arable land should look.

In June 2017, I reported an obstruction on the above Ribble Valley path to the Lancashire County Council.

Details of the Half Yearly Meeting

It has been decided that the Half Year Meeting will be held in Sheffield on Saturday, 19th October 2019.

On Birchin Hat stands S516 which the NT Peak Estate, after approving and erecting it for us...

Signpost is edited and published for the Society by Shirley Addy, editor@pnfs.org.uk. Postal: contact via Taylor House, 23 Turncroft Lane, Offerton, Stockport, SK1 4AB. Design and Print by Lymetrees (Tel / text 07984 059150).
The views expressed in this newsletter do not necessarily reflect the Society